Anderson Cooper and guests rip Rachel Dolezal for passing herself off as black: ‘The height of arrogance' 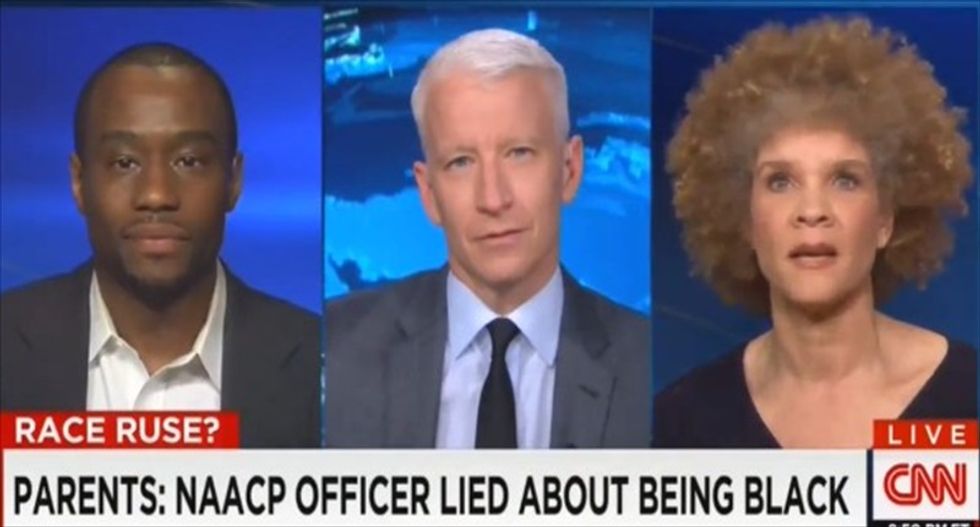 CNN host Anderson Cooper and his guests struggled to understand on Friday how Rachel Dolezal thought she was helping the African-American community by misrepresenting herself as black.

Contributor Marc Lamont Hill disclosed that he had encountered Dolezal, the head of the Spokane, Washington chapter of the National Association for the Advancement of Colored People (NAACP) at some events in the past.

"She was one of the people who said the Black Lives Matter movement needs to be led and directed by black people [and that] outsiders should not be there," Hill said. "It's the height of arrogance to say that and mendacity to say that at the very same time that you're actually white in the middle of it."

Dolezal, a white woman who said in an interview that she considers herself to be black, has been hit with widespread criticism after her parents revealed that she was posing as a black woman.

Both Hill and fellow panelist Michaela Angela Davis wondered if she was suffering from a mental health issue.

"I saw her giving a lecture on black hair and privilege, and she was claiming it as hers," Davis said. "And what's so disturbing is, she could have done all this good work as a white woman. She could have actually used her white privilege to help this civil rights movement."

While Dolezal might not realize the impact of her choices, Hill said, it was an "exercise of white privilege" for her to want to say she knew what was best for black communities.

"These are choices that black people can make, and if you are an advocate of black people, you should be advocating [for] black self-determination, the opportunity and ability to make our own choices for ourselves," he said. "We can't do that if you throw on the braids and the sarongs and act as if you were African and blacker than black."