The larger struggle: For many black Americans, the Confederate flag debate is a distraction 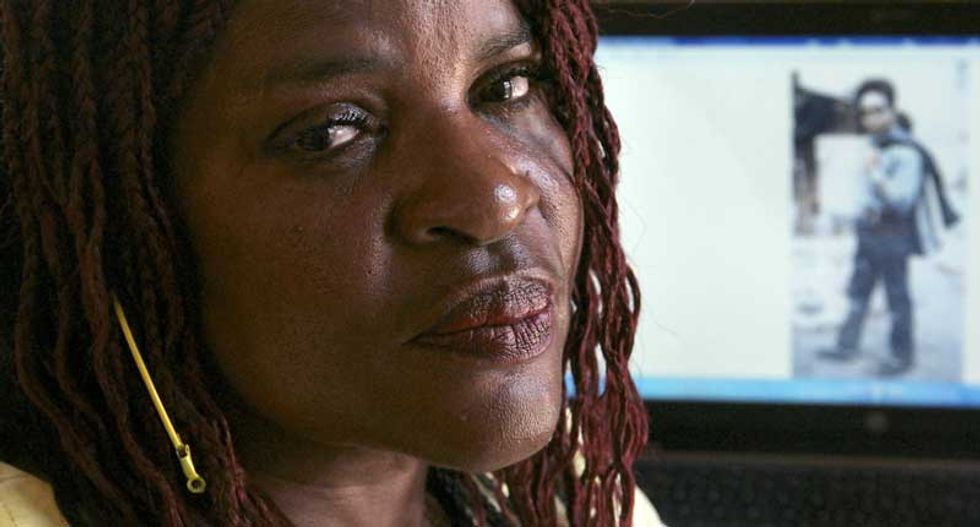 Vanessa White poses with a photo of her brother George Chapman, who was shot and killed in the 1990s, in Compton, California June 26, 2015. (REUTERS/Jonathan Alcorn)

As calls grow to remove the Confederate flag from public spaces across America's South, Vanessa White says she questions whether that would mark real progress for black Americans like her.

The 57-year-old Compton, California construction worker has seen and endured too much, she says, to be excited. Over the years, five members of her family have been killed by guns: her two brothers, at the ages of 28 and 38; her nephew, at 19; her niece, at 16; and her niece's mother, at 28. All of them had dropped out of school in their teens.

"We never felt like we were allowed near normal life," said White, speaking from the tidy, two-story home she purchased last year in the struggling suburb south of Los Angeles.

Across the country, African Americans are applauding a fast-growing movement to remove the Confederate flag from public life after last week's racially charged massacre of nine black worshipers in a Charleston church. But even many of those who support the effort suspect it will do little to address what they see as fundamental racial injustices - from mass incarceration of black men to a lack of economic and educational opportunities.

White’s view, she says, was shaped by exposure to racism as a child and also by a family she describes as dysfunctional. Her single mother was an alcoholic, and her brothers began committing crimes at an early age. She says she grew up never feeling like a real person because of her race.

"One day, when I was 16,” she recalls, “these little white kids chased after me screaming ‘nigger, get out of here!' I never forgot that."

In South Los Angeles, where police last year shot and killed Ezell Ford, a 25-year-old unarmed black man, residents interviewed by Reuters said that while they welcomed the prospect of the Civil War-era flag finally being purged from public grounds, they did not see its removal as a watershed moment for race in America.

"Black folks are still being killed; they are still being undereducated; they still have little access to health care," said Melina Abdullah, an attorney who has helped organize community response to Ford's killing. Taking down the Confederate flag, she says, will not solve "institutional racism and a police system that kills black people."

Streams of statistics underscore those concerns: the average white family had about seven times the wealth of the average black family in 2013, according to the Urban Institute, a public policy think tank in Washington. Since the early 1970s, black unemployment has been consistently more than twice as high as white joblessness, government data show. And more than 27 percent of blacks live below the poverty line, compared to 13 percent of whites.

Both Abdullah and White see far more intractable problems facing African-Americans than the Confederate flag, including a justice system with an incarceration rate six times higher for black men and a high rate of gun violence in many neighborhoods. In the United States, blacks are more than twice as likely to die from gunshots as whites, according to the Centers for Disease Control and Prevention.

“We can't have this debate over the flag blind people to the larger struggle,” said Abdullah.

Still, for many African Americans, the movement to bring down the Confederate flag holds powerful symbolism, especially after Dylann Roof, 21, was charged with the June 17 shooting in Charleston. In the days following Roof's arrest, photos were circulated showing the accused killer posing with the flag.

"That symbol, the flag, is hurtful for so many people of color. If you're not a person of color, you might not understand that," said Jerri Haslem, 51, who grew up in Birmingham, Alabama, and remembers as a child being called a racial slur by a boy wearing a Confederate T-shirt.

Defenders of the flag say it is a symbol of Southern pride and a tribute to the tens of thousands of Confederate soldiers killed in the 1861-65 Civil War. But many Americans, black and white, see it as a reminder that 11 Confederate states seceded from the union in order to preserve a system that enslaved blacks.

The flag still flies on the grounds of the state capitol in South Carolina, where the Civil War began, although the state's Republican governor and other lawmakers now want it removed.

Mervyn Marcano has helped organized protests around the killing of Michael Brown, a black teenager gunned down by a white policeman in Ferguson, Missouri. He describes calls by politicians for the flag's removal - particularly those of white lawmakers in South Carolina who never backed such a move previously - as a "cheap political branding opportunity".

In Baltimore, too, where Freddie Gray, a 25-year-old black man died in the back of a police transport van in April, some activists worry that focusing on the flag pushes other important issues into the background.

"Taking down the flag does not improve the quality of life for black people," said Dayvon Love, director of public policy for the Baltimore-based Leaders of a Beautiful Struggle.

The way forward, he said, is to build black civil organizations to educate and empower more people to advocate for laws and policy changes that will help black lives.

“To intellectualize the flag to a place where it is a major problem is frustrating when there is so much real work to be done," Love said.

Glenn Martin knows the odds many black Americans face. Now 42, he grew up in the crime-ridden New York neighborhood of Bedford-Stuyvesant in the 1980s and 1990s, a mixed-race child of a single black mother of three who was on welfare. He says he was subjected to racist taunts and insults by white colleagues at a series of jobs.

Eventually, he turned to crime, robbing stores at gunpoint, a life that led him in and out of the prison system. Eventually, in his thirties, he turned his life around and now works for JustLeadershipUSA, an advocacy group dedicated to cutting the U.S. prison population.

“For so many black lives, it's a cycle of in and out of the welfare system and the jail system,” he said.

Asked whether the movement to bring down the Confederate flag will help, he was dismissive. "We are always looking for the easy way out rather than having difficult discussions about systematic racism."

(Additional reporting by Harriet McLeod in Charleston and Wayne Hester in Birmingham. Editing by Jason Szep and Sue Horton)