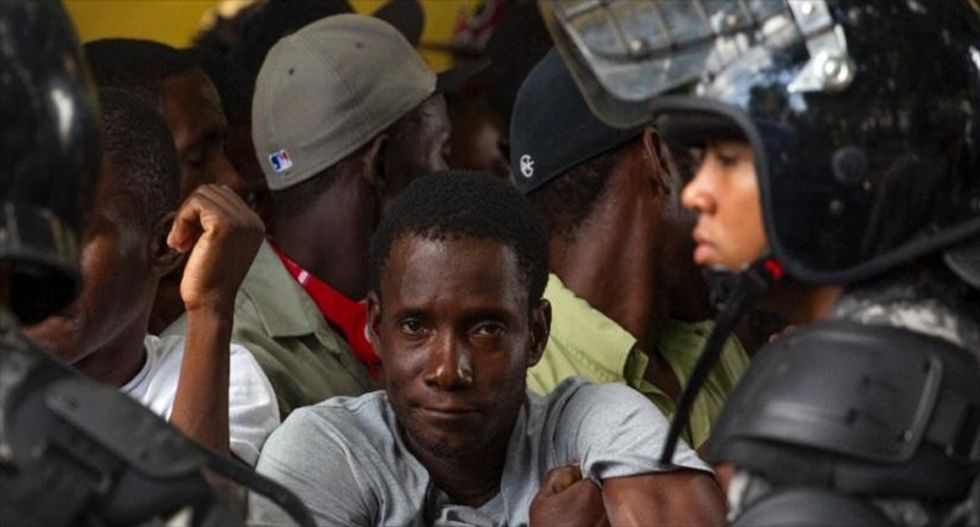 Haitians queue up to legalize their status at the Interior Ministry in Santo Domingo, on June 17, 2015. Photo by Erika Santelices for Agence France-Presse.

Tens of thousands of Haitians queued desperately outside government offices in the Dominican Republic Wednesday, racing the looming deadline for undocumented immigrants to register with the authorities or face deportation.

The Dominican government has given undocumented immigrants -- the vast majority of whom are from neighboring Haiti, the poorest country in the Americas -- until the close of business Wednesday to submit papers under new rules to apply for legal residency.

But with government offices struggling to handle all the applications from the huge crowds lined up day and night, rights groups estimate some 200,000 Haitians will be left facing deportation.

Some of them know no other home.

"I was born here," said Karina Charles outside the interior ministry in Santo Domingo.

"I want something that will allow me to stay here so I won't be deported to a country I don't even know," she told AFP.

An estimated 458,000 Haitians live in the Dominican Republic, often laboring in the sugar cane fields or as domestic workers.

The flow of migrants only increased after the 2010 earthquake in Haiti, which killed 200,000 people and uprooted one million more.

The so-called National Plan for the Regularization of Foreigners is the latest source of tensions between the Dominican government and the Haitians who have sought to carve out a better life there and escape chronic poverty and political instability at home.

Haitian immigrants have long been targets of resentment and racism, which boiled over into the massacre of thousands of them in 1937 under the orders of Dominican dictator Rafael Trujillo.

In 2013, the Constitutional Court controversially ruled that children born to undocumented immigrants in the Dominican Republic are not Dominican citizens -- a move international rights groups warned risked leaving them stateless.

The controversy led President Danilo Medina to launch the current plan and sign a law recognizing the Dominican-born children of undocumented immigrants as citizens.

Under the plan, undocumented immigrants have until 7:00 pm (2300 GMT) to hand in the initial paperwork -- an identity document from Haiti, an address and a phone number.

Those who submit these documents on time will then have a year to complete the process by presenting proof of employment, a clean criminal record and documents showing they have been in the Dominican Republic since before 2011.

But the wheels of bureaucracy turn slowly on Hispaniola, the island the two countries share.

Many would-be applicants complain they have not received their Haitian IDs months after applying for them. And thousands of those who have them will likely still be lined up outside the Dominican registration centers when the deadline arrives.

Interior Minister Jose Ramon Fadul sought to sound a reassuring note, though authorities have not offered to extend the deadline.

"We are going to work until the line is finished because we don't want to mistreat anyone," he said.

"Repatriation should be the exception. We want everyone to be regularized."

He said 275,000 people had registered under the plan by Wednesday.

Many applicants complain of a lack of information around the process and say the registration centers have made things unnecessarily difficult.

There have been clashes in recent days outside some registration centers, which police broke up with tear gas.

Hundreds of Haitians have reportedly given up on the process and begun making their way toward the border, opting to go back voluntarily rather than face deportation.

The Dominican government, which has been accused of violating deported Haitians' rights, says it has invested in buses and holding centers to ensure decent treatment of those who are deported.