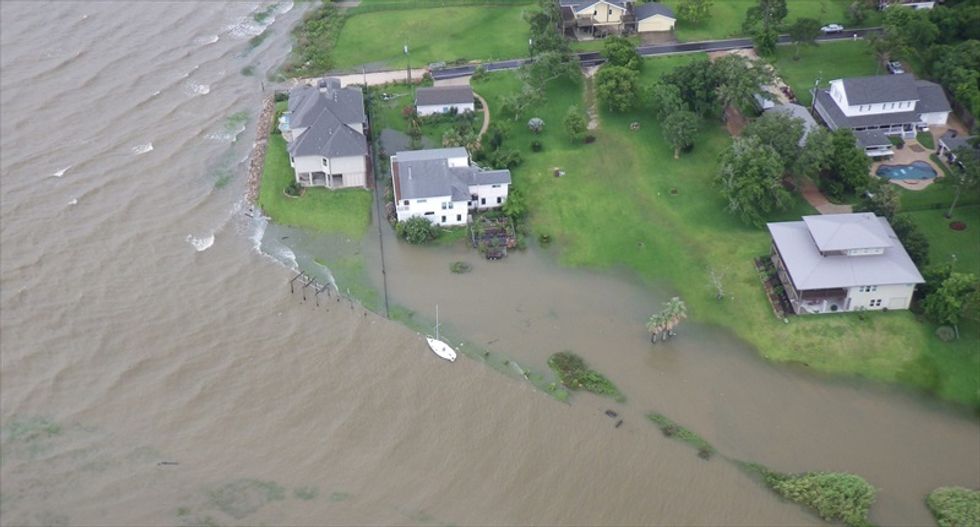 Flooding is pictured from a Coast Guard Air Station Houston MH-65 Dolphin helicopter as it flies over Galveston, Texas after Tropical Storm Bill made landfall in this handout photo provided by the U.S. Coast Guard and taken on June 16, 2015. REUTERS/U.S. Coast Guard/Petty Officer 1st Class Brian Bastob/Handout via Reuters

Tropical Depression Bill pelted Oklahoma with heavy rains, triggering flooding that killed a 2-year-old toddler who was swept out of his father's arms by raging waters, officials said on Thursday.

One person in neighboring Missouri was killed by flooding caused by rains from the storm hitting the region and a woman died in central Texas when she lost control of her car while driving through the storm, officials said.

Bill, the second named tropical storm of the 2015 Atlantic hurricane season, is expected to dump between 2 to 4 inches (5 to 10 cm) of rain as it travels northeast through Arkansas and Missouri into West Virginia.

Some areas could see as much as 12 inches (30 cm), the National Weather Service said. It has issued a flash flood watch stretching from the Texas Coast into Illinois.

By Friday, the center of the storm is expected to be over southern Missouri and weaken over the next few days, the National Weather Service said.

Missouri Governor Jay Nixon declared a state of emergency, due to floods, saying in a statement, "with more heavy rain in the forecast, we will continue to remain in direct contact with law enforcement and local officials as we work to protect lives and property."

The Oklahoma Highway Patrol temporarily closed northbound lanes of Interstate 35, a major U.S. north-south corridor, about 80 miles south of Oklahoma City due to the rockslide, which injured at least one person whose vehicle was struck by a boulder.

In the southern city of Ardmore, emergency workers on Thursday found the body of the 2-year-old boy swept away in flooding on Wednesday, police said.

The storm, which came ashore in Texas on Tuesday, lashed an area from Houston to Dallas with heavy rain.

In late May, severe weather killed nearly 40 people in Texas and Oklahoma with storms causing flooding that damaged thousands of structures.

Bill could cause rivers already swollen by those torrential rains to spill over their banks again, the National Weather Service warned.

Nearly 100 flights had been canceled at airports in Houston and Dallas, some of the nation's busiest as of 4 p.m., according to tracking service FlightAware.com.