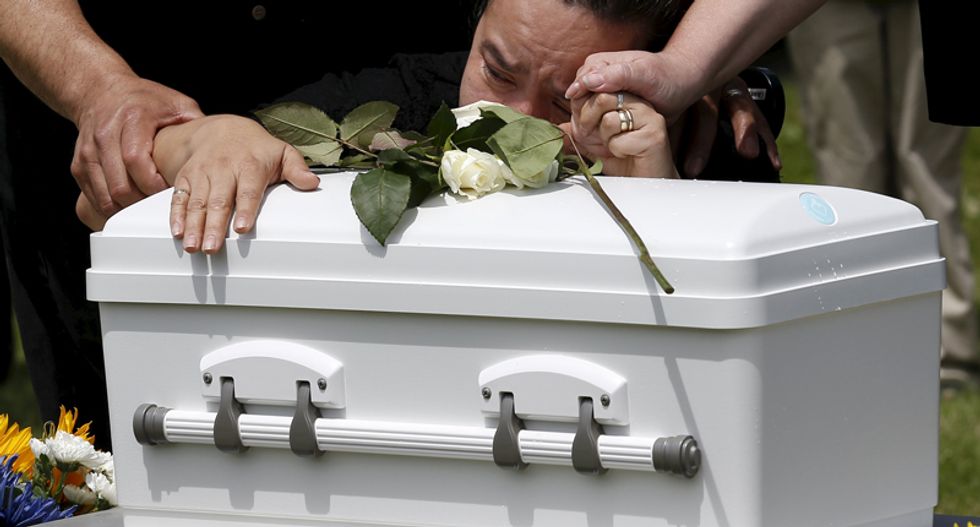 The grandmother of baby Angel Antonio cries on his casket during a burial service at All Saints Cemetery in Des Plaines, Illinois, United States, June 19, 2015. (REUTERS/Jim Young)

More than a year after he was found dead in a plastic shopping bag, a newborn boy was laid to rest in a tiny white casket, covered with blue and white flowers.

Chicago police officers, including one who had investigated his death in April 2014, served as pall bearers. Prosecutors charged the baby's teenage mother, Ana Rosa Mora, with murder.

"We may feel that it's too little, too late. But that we're here today is not nothing," Deacon Jim Pauwels said, asking a small crowd at St. Hyacinth Basilica on Chicago's northwest side to pray for both mother and child.

Pauwels, 53, is a board member of Rest in His Arms, a decade-old Illinois charity started by Susan Walker, 46, after she saw reports about a dead baby boy found at a recycling plant. His parents were never found.

Walker carried a news clipping about the boy for days and then called the Lake County sheriff and asked if she could plan a funeral.

The sheriff was suspicious, and demanded a DNA test to see if Walker was the mother. Once she was cleared, Walker arranged the funeral with the help of the coroner.

"We had 150 total strangers show up - even the people who found him at the recycling plant came," Walker said.

Soon the coroner called again to ask if she could help with two other children left in the morgue for years. One had been found in a dumpster behind a grocery store.

Over the years, the group has provided funerals to 25 children, mostly infants, who were abandoned or victims of crimes. It also has provided help to parents too poor to bury their deceased children.

"There are horrific, awful places where these children have been left to die," Walker said.

One 3-year-old boy had been put in a duffle bag and tossed off a roadway overpass. Another 3-year-old boy was burned by his grandfather, angry over his daughter's marriage.

In every case, the family was either not identified or did not claim the body, and coroners gave the child to Rest in His Arms, Walker said. If a baby is nameless, volunteers provide one; the boy at the June 19 service was Angel Antonio.

Pauwels, who knows Walker from church, said the group usually arranges a Catholic Mass but offers nondenominational services if requested. The group only operates in Illinois, but people from other states have asked for advice.

Rest in His Arms also tries to educate about Illinois' Safe Haven Law, which allows people to surrender babies up to 30 days old to staff at hospitals, police stations or fire stations with no questions asked. All 50 states have similar laws.

Since Illinois' law passed in 2001, 106 babies have been safely given up. Another 73 have been illegally abandoned. Of those, 37 died, said Dawn Geras, president of the Save Abandoned Babies Foundation.

Pauwels said the funeral and burial rites provide "consolation and comfort to people who one way or another are touched by the child's story."

Often neighbors come and emergency workers such as paramedics and firemen and at times, entire police departments, Pauwels said.

"These big, hardboiled police officers get really upset when something like this happens to a child," Pauwels said.

Sometimes family members attend. Angel's grandparents came to his Mass and burial on June 19 where they wept and prayed. Their daughter's trial date has not yet been set.