Today in History: the KKK murder of three Civil Rights workers and the targeting of Black Churches 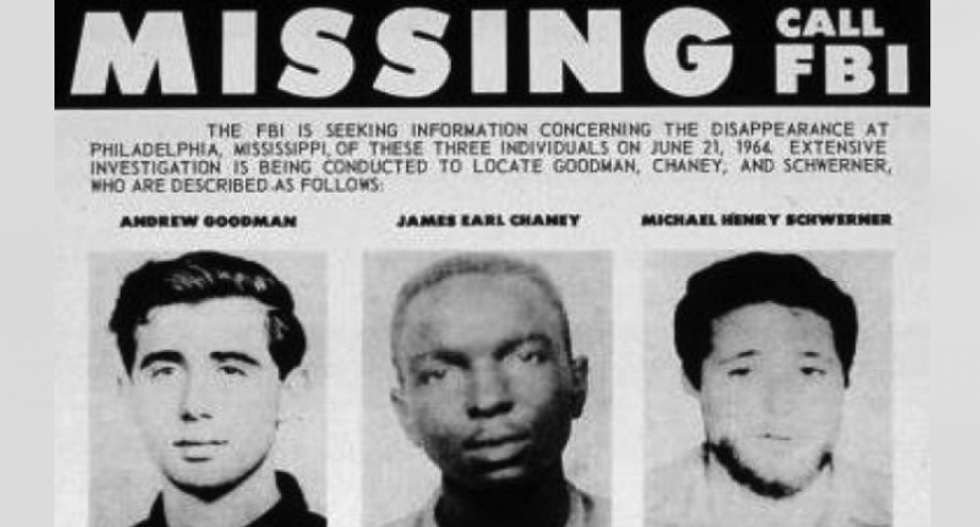 I learned about Schwerner, 24,  Chaney, 21, and Goodman, 20, when I was eleven and attended Camp Kinderland for the first time. Not only is there a bunk named after the three slain Civil Rights workers, but the late Carolyn Goodman, Andrew Goodman's mother, visited the camp and spoke to campers and counselors. I remember her explaining that the two young Jewish men from New York City, Goodman and Schwerner, and the young Black man from Meridian, Mississippi, Chaney, had been beaten and killed by the KKK for participating in Freedom Summer, the 1964 campaign that engaged 700 young people from around the nation to join with local students and organizers to register Black voters.

It wasn’t until this week, though, when a white supremacist fatally shot nine Black members of the Emanuel African Methodist Episcopal Church, that I realized that Goodman, Schwerner and Chaney were killed while trying to investigate an attack on another Black church. On June 16, approximately 30 KKK members waited until all but ten people had left the Mt. Zion Methodist Church in Neshoba County, Mississippi, beat them, and doused the church with ten gallons of gasoline, burning it to the ground.

At the time of the attack, Schwerner and Chaney, both organizers for CORE (Council on Racial Equality), were attending a training in Ohio, which was preparing volunteers for Freedom Summer.  One of the people being trained there was Andrew Goodman.  Learning of the attack, the three returned to Mississippi and, on June 21, inspected the charred remains of the church and spoke to the witnesses.

Schwerner had told Meridian CORE worker Sue Brown that if they weren’t back at the Meridian CORE office by 4:30, she should start making phone calls inquiring after their whereabouts.  Schwerner’s fears were realized as they drove from Shenoba County back to Meridian. Their car was pulled over, and County Deputy Sheriff  Cecil Price, also a Klan member, arrested Chaney for speeding and Schwerner and Goodman on suspicion of burning the Mt. Zion Church. Price contacted Klan members before releasing the three young men around 10:30 that night. As they attempted to make their way back to the CORE offices, Goodman, Schwerner and Chaney were overrun by three cars of Klansmen, including Price, forced out of their car, taken to an abandoned road and shot. Chaney’s body was mutilated beyond recognition.

Forty four days after the disappearance, their bodies were found buried 15 feet beneath an earthen dam on a private farm. During the search for the bodies, Schwerner’s wife Rita, who also worked for CORE, told reporters, “The slaying of a Negro in Mississippi is not news. It is only because my husband and Andrew Goodman were white that the national alarm has been sounded.” Indeed, during the search, the discovery of the bodies of eight Black men, only three of whom were identified,  received little attention. David Goodman, Andrew's younger brother, also noted, "It took two white kids to legitimize the tragedy of being murdered if you wanted to vote.” David Goodman said. Many attribute the passing of the Voting Rights Act to that very tragedy as played out through the murders Mississippi. (Though the Supreme Court gutted the Act in 2013.)

The events June, 1964 and June, 2015, are part of the same legacy of racist violence which targets Black churches and human being for organizing against white Supremacy or for merely being Black. What will come of this latest act of racist terrorism, all of whose victims were Black?

For more about the the case and its legacy, watch this DemocracyNow! special.