Trans activist defends crashing Obama event: There is no 'Pride' in US treatment of gay immigrants 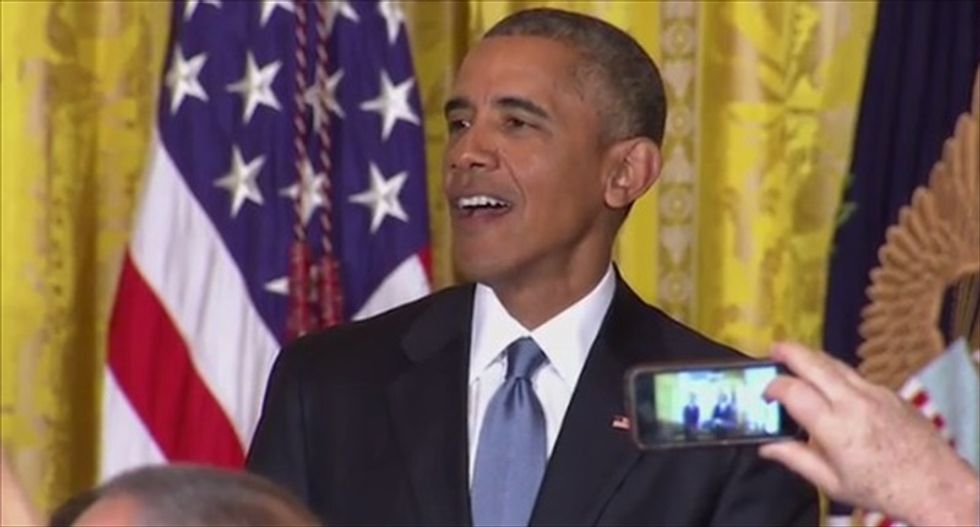 President Barack Obama confronts a heckler during a White House event on June 23, 2015. [The Washington Post]

The heckler removed from a White House event on Thursday identified herself as an undocumented trans woman who was on hand to demand the release of 75 trans, gay, and lesbian immigrants currently being detained by immigration officials.

"The White House gets to make the decision whether it keeps us safe," Jennicet Gutiérrez said in a statement emailed to The Raw Story by the LGBT advocacy group GetEQUAL. "There is no pride in how LGBTQ and transgender immigrants are treated in this country. If the President wants to celebrate with us, he should release the LGBTQ immigrants locked up in detention centers immediately."

The remark was a reference to LGBT Pride Month, which was the focus of President Barack Obama's remarks at the event before Gutiérrez interrupted him, saying, "Release all LGBTQ immigrants from detention and stop all deportations."

As Vox and other outlets reported, Obama responded by telling her, "No, no, no, no, no. Hey, listen, you’re in my house. You're not gonna get a good response from me by interrupting me like this."

As members of the audience jeered the interruption, Obama added, "Shame on you. You shouldn't be doing this."

Video of the encounter shows Gutiérrez, who emigrated to the US from Mexico, being taken away from the event while chanting "Not one more deportation" in both English and Spanish.

"As a general rule, I am just fine with a few hecklers," Obama said. "But not when I'm up in the house. My attitude is, if you're eating the hors d'oeuvres ... you know what I'm saying?"

Two years ago, another GetEQUAL member, Ellen Sturtz, interrupted First Lady Michelle Obama during an event, asking her to call on the president to sign an executive order preventing federal contractors from discriminating against employees based on their gender identity or sexual orientation.

Watch Gutiérrez's encounter with Obama, as posted online on Wednesday, below.