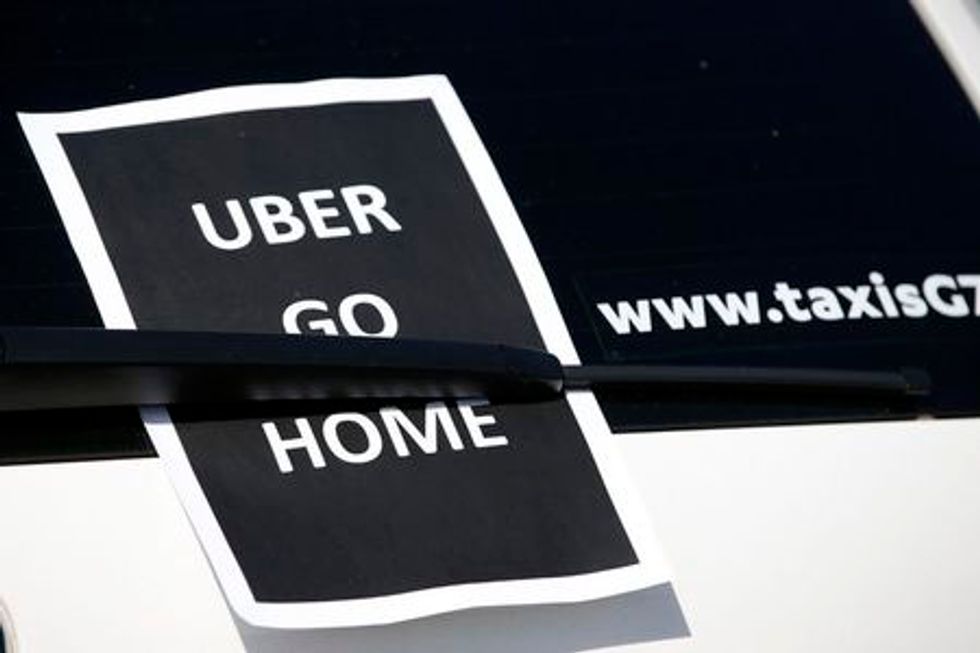 A leaflet which reads "Uber go home" is seen on a taxi as striking French taxi drivers block the traffic on the Paris ring road during a national protest against car-sharing service Uber, in Paris, France, June 25, 2015. REUTERS/Charles Platiau

French police have brought in two executives from U.S. technology company Uber for questioning as the government clamp down on the taxi and ride-sharing service intensifies, said a person from the prosecutor's office.

Thibaud Simphal, the manager of Uber France, and Pierre-Dimitri Gore-Coty, the general manager for Western Europe, were detained.

The French government filed a legal complaint against Uber on Friday over UberPOP, one of the services on the popular smartphone app, which allows drivers to pick up passengers in their personal cars despite having no professional drivers' licenses.

The same split that is dividing Republicans nationally, whether to embrace or reject the fiction that the 2020 presidential election was illegitimate, is now reverberating backstage at the Veterans Memorial Coliseum in Arizona, where pro-Trump contractors are leading a state-sponsored inquiry into the vote in Maricopa County, home to Phoenix and 60 percent of Arizona voters.

The state Senate's lead contractor, Florida-based Cyber Ninjas, whose CEO Doug Logan had said that Joe Biden's victory was illegitimate, has been opposing an effort to widen the Arizona Senate's inquiry—via another assessment that vets the 2020 vote more thoroughly. Logan also has sought to muzzle and even oust the lead proponent of that more detailed inquiry, former Arizona Secretary of State Ken Bennett, a Republican. Senate President Karen Fann asked Bennett to take the role of Senate audit liaison after she hired Cyber Ninjas. He is not taking any compensation for his role, unlike Cyber Ninjas and the subcontractors.

In a biting column for the Daily Beast, Molly Jong-Fast notes that that talk of a Trump family political dynasty has all but disappeared since Donald Trump lost the 2020 presidential election and his children slide into increasing irrelevance.

As Jong-Fast notes, it wasn't that long ago when Ivanka Trump was going to use the family name and her father's popularity with a rabid right-wing base to challenge Sen. Marco Rubio (R-FL) for his U.S. Senate seat, Lara Trump -- wife of Trump son Eric -- was looking at an open North Carolina Senate seat and Don Jr. was going to run for office -- somewhere.