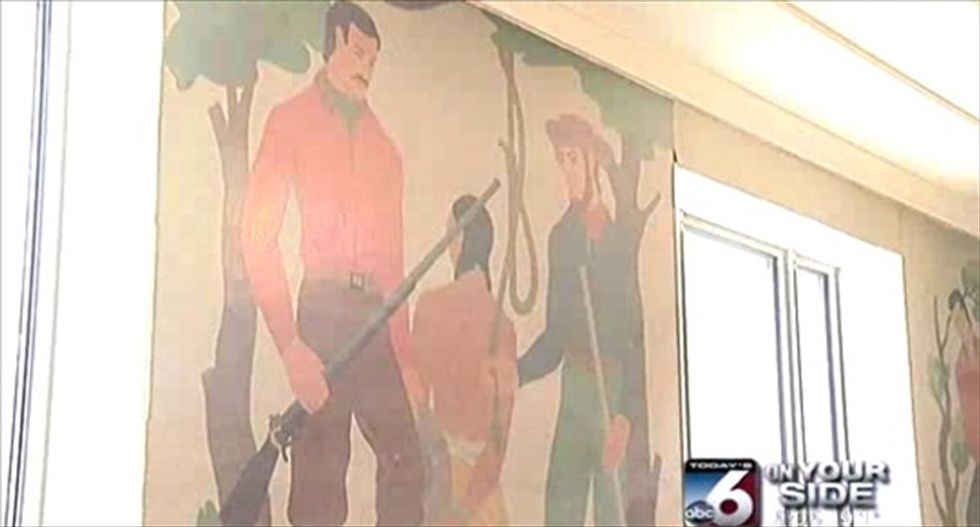 A mural depicting the lynching of a Native American will be covered up by the University of Idaho. [KIVI-TV]

The University of Idaho intends to cover with fabric a pair of controversial murals in a historic Boise building that depict the lynching of a Native American man by two white settlers armed with a rifle and stick.

The masking of the murals comes as the university based in the Idaho city of Moscow prepares to mark the formal opening of a satellite campus for its law school at the former Ada County Courthouse in September.

By covering the images, including one in which a bound Native American man kneels beneath a tree whose branch bears a noose, the university acknowledges they will be offensive to some and that they are not representative of a known historical event, a school official said on Thursday.

“Displaying these lynching murals is not consistent with our educational mission,” said Lee Dillion, an associate dean of the university’s College of Law.

The paintings were controversial from the time they were created by a team of artists led by a southern California painter and installed in the courthouse not long after the Art Deco structure was built in the late 1930s, Dillion said.

A state judge ordered them covered in the 1970s, and for decades U.S. and Idaho state flags shielded the murals from view.

A debate over the artworks reignited several years ago when the building was temporarily used by the Idaho legislature during renovations of the nearby statehouse, Dillion said.

Representatives of Native American tribes in Idaho and national and regional organizations did not immediately respond to requests for comment.

David Leroy, a former Idaho attorney general and former chairman of the Foundation for Idaho History, said the paintings could still be worth studying.

“The paintings support the case for how unfairly and grossly the original peoples were treated by the white settlers who invaded their aboriginal territories,” he said.

There were no known lynchings in Idaho involving Native Americans or African-Americans, said Dillion, but a national database suggests more than a dozen whites were lynched in the state for crimes such as cattle theft.

Watch a report on the mural, as aired on KIVI-TV on Wednesday, below.