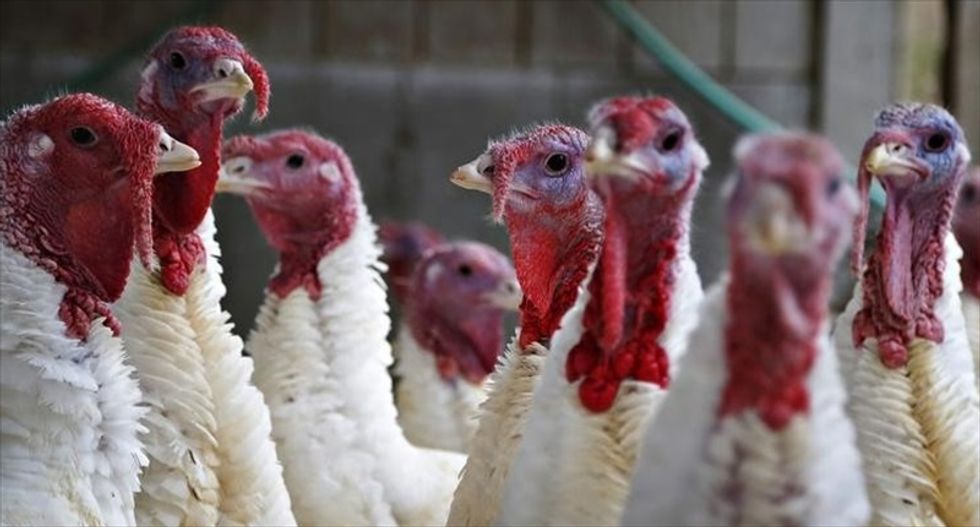 Turkeys look around their enclosure at Seven Acres Farm in North Reading, Massachusetts on Nov. 25, 2014. Photo by Brian Snyder for Reuters.

The U.S. Department of Agriculture's monthly turkey hatchery report on Tuesday showed a significant decline in the number of poults, or young turkeys, placed on feed in May, suggesting supplies of fresh whole birds may tighten this Thanksgiving.

But analysts are at odds about how much the shortfall will impact shoppers planning Thanksgiving Day meals as many of the birds available in stores are slaughtered and frozen long before the November holiday.

The worst-ever U.S. outbreak of highly pathogenic avian influenza, or bird flu, has raised concerns about higher turkey prices this holiday season. The outbreak has claimed about 7.8 million turkeys in seven states this year, many of them culled to control the virus' spread.

The losses represent a sliver of total U.S. production that was pegged at 237.5 million turkeys in 2014, according to USDA data.

Tuesday's monthly report showed poult placements dropped to 21.6 million in May, down 1 percent from the prior month and 7 percent from a year earlier.

Amanda Martin, senior analyst with Indiana-based Express Markets Inc Analytics, said that Tuesday's report offered a "hint" of the bird flu's impact since an unknown number of breeder flocks were hit by the outbreak. A clearer picture may come with a USDA poultry slaughter report on June 25.

May placements would be going to slaughter between August and October, depending on whether birds are hens or toms. Martin noted a May and June deadline for placing heavy tom poults for them to be ready to be sold as whole birds at Thanksgiving.

"To see that it is down 7 percent makes me think, that's probably going to mean the whole birds for Thanksgiving are going to be extremely hard to come by," said Martin.

Others downplayed the impact and blamed the drop in placements on a "bunching effect" in production cycle.

National Turkey Federation spokesman Keith Williams noted that most shoppers buy turkeys that are frozen and those consumed this November were produced before the bird flu struck the upper Midwest.