Veterans, writers, 'committed Christians': Meet the leaders of the League of the South 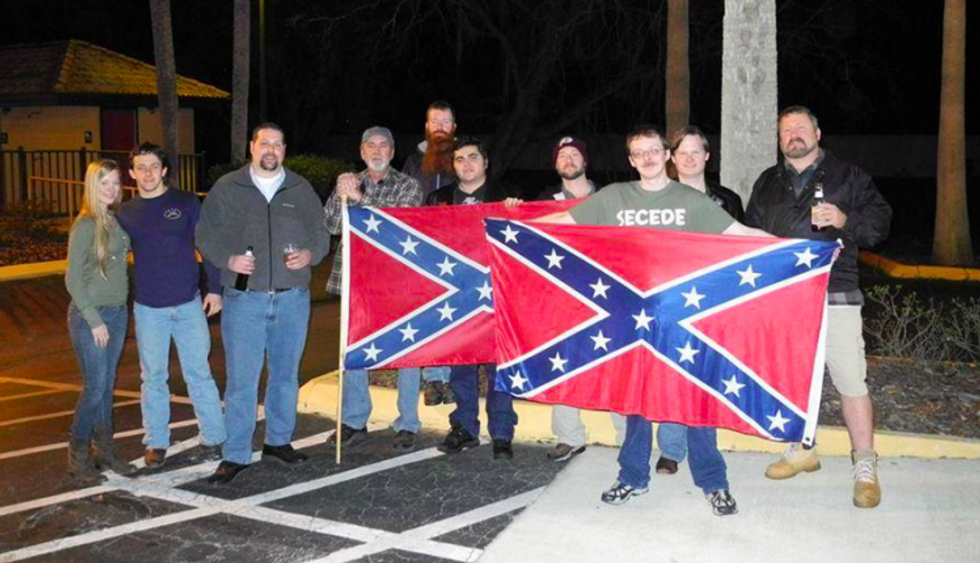 League of the South gathering in Florida (screenshot/Facebook)

The firing of Aniston, Alabama police officer Josh Doggrell last week for his links to the League of the South prompted The Raw Story to see which officials in the neo-Confederate group held similarly prominent positions in their own communities.

Here's a primer on the LOS' six board members:

Cook is a former Army General, a Christian pastor, and a dermatologist in South Carolina.

A practicing physician at "Southern Dermatology" in Aiken, Cook also holds the title of "Ruling Elder" at the New Hope Presbyterian Church.

A resident of Alabama, Hill is the author of two books on Irish and Scottish military history, as well as the LOS' president.

Hill does a considerable amount of white supremacist PR in major media outlets. According to Hill's official LOS biography, he has made to the case for his organization on BBC Television, Fox News, and other radio and television talk shows.

After 22 years as a Christian reverend in Mississippi, Case retired from his pastoral position last year.

The Aquila Report, a conservative evangelical publication, wrote that Case received a standing ovation from parishioners during after a resolution in the pastor's honor was read aloud at his retirement ceremony.

The resolution thanked Case for his decades of "faithful service" and expressed hope that God would "continue to bless Gene as he continues to serve the Kingdom."

According to his LOS biography, Crane is an IT professional who "provides technical and Internet services for a number of Southern and Christian companies and organisations, including the League of the South."

Crane, a "committed Christian," attends the Morgantown Baptist Church and acts as chairman of the Fannin County Good Samaritans Benevolence Committee, an inter-denominational coalition of churches in the region.

A resident of Arab, Alabama, Thomey's LOS bio says he's "an avid hunter and fisherman and a successful athlete, quarterbacking his high school football team to a State Runner-Up title and earning All Conference honours in his senior year. His interests and talents include singing and playing guitar."

Thomey holds a bachelor's degree in civil engineering and owns a company called Structural Engineering, which provides services to infrastructure and building projects throughout the United States.

The company website describes its approach to customer service as follows: "We pride ourselves on taking an old-fashioned, Southern approach to conducting business."

Tuggle's LOS narrative describes him as a "project Manager and business consultant in Charlotte, North Carolina."

Tuggle is well published on economic and political issues, which he approaches from a right-wing perspective. Tuggle's work has appeared in the American Spectator, the Charlotte Observer, and the Underwriting Trends Journal of the Society of Charted Property and Casualty Underwriters.

The regularly updated LOS blog is Tuggle's domain. On Wednesday, Tuggle posted a piece called, “Anti-Southern Hysteria Gets Hysterical," railing against the growing opposition to flying the Confederate flag on public grounds:

"The DC Empire's very own Cultural Revolution is glowing red-hot, and shows no signs of abating. Like the Red Guards of Communist China who screamed insults at anyone or anything they imagined represented traditional culture, DC's Red Guards are trying to out-do each other in discovering and uprooting symbols of the South. The DC Red Guards blubber that the Confederate Battle Flag has to be hidden from view because it was in a picture with a homicidal maniac. But since this is mass hysteria, now they demand EVERYTHING Southern has to go, including the First National Flag. Yes, the First National."