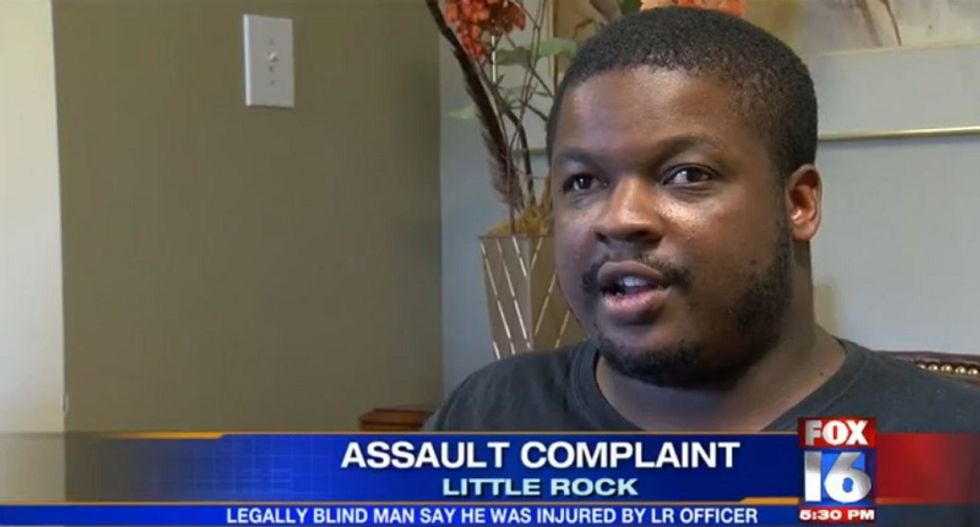 A legally blind Little Rock, Arkansas man who can be seen on video complying with police officers is asking why the officers roughly threw him to the ground in a June 1 incident, resulting in a back injury, local station Fox 16 reports.

In a police report obtained by Fox 16, one of the officers claims that Eric Wilson "pulled away violently causing me to lose grip," and he was "afraid that Wilson would strike myself or my partner with the handcuff."

But video of the incident shows nothing of the sort.

Wilson, who told reporters he can only see shadows, can be seen walking toward the two police officers when they summon him. When they tell him to take his hands out of his pockets, he does so. The video shows Wilson standing quietly with his hands behind his back as the officer goes to handcuff him. The officer then suddenly pushes Wilson to the ground.

The incident occurred at about 4 p.m. after Wilson had gotten off work at Lighthouse for the Blind. He missed his bus and began to walk home. Police were called by someone who reported a man "fitting Wilson's description" who was either running away or chasing someone, and who looked afraid, the station reports.

Police reported seeing a black handle sticking out of Wilson's pocket. That turned out to be a clock designed to read the time for blind people.

Wilson has filed a formal complaint, which the police department told the news station they are investigating.