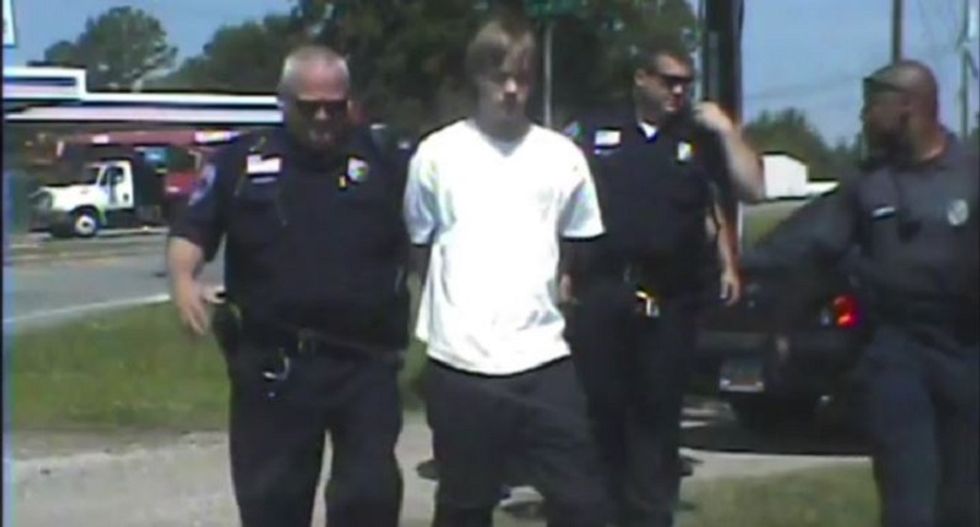 Newly-released dashcam footage of the arrest of alleged Charleston shooter Dylann Roof shows officers from the tiny town of Shelby, North Carolina calmly taking the 21-year-old white supremacist into custody, then grinning and high-fiving each other once he was in custody.

Roof was arrested on Thursday, June 19 at about 10:32 a.m. local time, according to the police report. At about 9 p.m. the night before, Roof is suspected of attending a Bible study at the historic Emanuel AME in Charleston and opening fire on the group at its conclusion. Nine African American church members were killed, including civil rights leader and state senator Clementa Pinckney.

At the time of his arrest he had traveled about 240 miles from the church in his Hyundai Elantra, according to Yahoo News.

The video shows two police vehicles put their lights on and pull over a car right on the tail of a semi-truck. The black car makes a right turn off the highway and stops. Several officers approach the car, and one walks directly to the driver's side. Roof can be seen getting out of the car and putting his hands on the roof as he is frisked.

The officers and dispatch immediately confirm Roof has been stopped and apprehended "for the news agencies."

After placing Roof in the patrol car, the officers immediately return and start searching his vehicle. Officer Joe Burris can be seen victoriously clapping his hands together after discovering a Glock semi-automatic handgun hidden under a white pillow in the backseat of Roof's car. Burris turns and high-fives his co-workers.

According to the Shelby police report, Roof was spotted driving a black sedan westbound on Highway 74 through the small North Carolina town by driver who called 911. The driver was Debbie Dills, an employee at a nearby shop, Frady's Florist, Eyewitness News reports.

Shelby officer Dan Bernat, who authored the police report, parked his patrol vehicle with partner Joe Burris on the highway shoulder and saw Roof in the fast lane. After Bernat merged onto the highway, Roof "abruptly moved over to the right lane in front of a traveling vehicle."

After confirming the license plate with dispatch, Bernat writes he "observed the vehicle traveling too close to a tractor trailer" in front of him and made a felony vehicle stop.

The FBI questioned Roof, but Shelby police chief Jeff Ledford described him as quiet while in custody. At one point, the officers brought him Burger King because he hadn't eaten, the Charleston Observer reported.

Citing anonymous sources, the Washington Post reports Roof told authorities he targeted one of the nation’s oldest black churches "because he wanted to ensure that he would avoid killing white people." He almost didn't go through with his "mission" because the parishioners were so kind to him.

Watch the video of the arrest from Yahoo News here: