Virginia man awarded $500,000 after catching doctors on tape mocking him during surgery 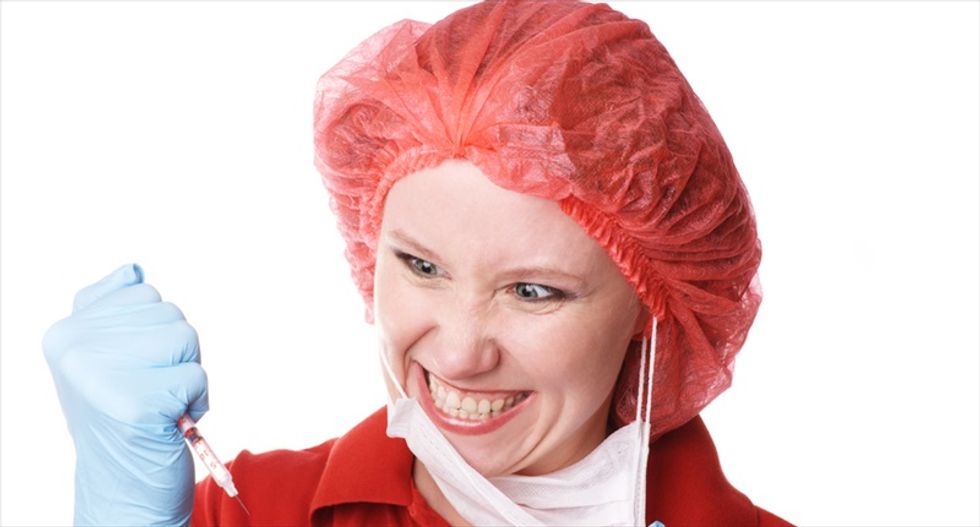 A jury in Fairfax County, Virginia awarded a man $500,000 after he recorded his surgical team repeatedly insulting him while he was under anesthesia during his colonoscopy, the Washington Post reported.

The recording captures the anesthesiologist, identified as 42-year-old Tiffany M. Ingham, telling the patient, "After five minutes of talking to you in pre-op, I wanted to punch you in the face and man you up a little bit."

Ingham is also heard telling a medical assistant she might get "some syphilis on your arm or something" if she touched a rash she spotted on the patient, adding, "It's probably tuberculosis in the penis, so you'll be all right."

According to the Post, the plaintiff -- identified in court documents as "D.B." to protect his identity -- began recording the procedure on his smartphone before being placed under anesthesia, in hopes of capturing instructions from his gastroenterologist, 48-year-old Soloman Shah, following the procedure in April 2013.

Instead, the audio captured Shah joining in on the verbal abuse, telling the assistant, "Just tell him Dr. Shah said everything, you're just not remembering it." Ingham then advises Shah to set up a "fake page" so he can avoid talking to the patient.

Shah also complained that patients in Virginia were more "holier than thou" compared to Texas.

"Too much Internet use, a little too much information," he said.

Juror Farid Khairzada told the Post that the $500,000 award was a compromise, since the patient originally filed a $1.75 million defamation and medical malpractice suit against the surgical team, while at least one juror thought D.B. should not have been compensated at all. The patient was awarded $100,000 for the defamation, as well as $200,000 for medical malpractice and another $200,000 in punitive damages.

"We finally came to a conclusion that we have to give him something, just to make sure that this doesn’t happen again," Khairzada said.

Attorneys for Shah and his team argued that the patient's recording was illegal because the phone was hidden in the patient's pants, which were under the operating table at the time. But D.B's lawyers countered that under state law, only one party involved in any conversation can consent to recording it.

Listen to the verbal abuse from Shah and Ingham, as posted online on Tuesday, below.