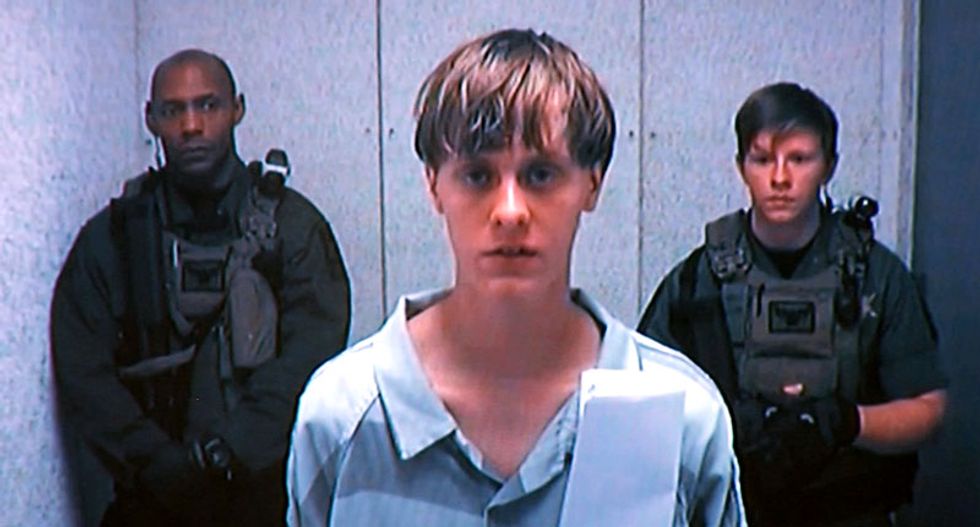 Dylann Storm Roof appears by closed-circuit televison at his bond hearing in Charleston, South Carolina June 19, 2015 in a still image from video. REUTERS/POOL

Relatives of some of the nine black parishioners gunned down at a historic South Carolina church addressed on Friday the 21-year-old white man charged with murdering their loved ones, before a judge ordered him held without bail.

Dylann Roof, appearing in a video feed from the jail where he was brought after the end of a 14-hour manhunt on Thursday, stood quietly, looking down, as Judge James Gosnell ordered him held and victims' family members spoke.

"May God have mercy on your soul," said the mother of the youngest victim, 26-year-old Tywanza Sanders, while Roof looked on, expressionless.

The attack on Wednesday at Charleston's nearly-200-year-old Emanuel African Methodist Episcopal Church came in a year that has seen waves of protest across the United States over police killings of unarmed black men in cities including New York, Baltimore and Ferguson, Missouri, which have sparked some of the largest race riots since the civil rights movement of the 1960s.

Roof spoke little during the hearing, providing brief answers to the judge's questions, confirming his name and address and saying he was unemployed.

Judge Gosnell, who had no authority to release Roof on the nine murder charges he faces, set a bond of $1 million for the one gun charge he faces. Roof remains in custody.

From U.S. President Barack Obama, who has said the attack stirred memories of "a dark past," to residents on the streets of Charleston, Americans have expressed outrage at an act intended to provoke a "race war" in the United States.

This latest in a series of mass shootings that have rocked the United States also illustrated some of the risks posed by the nation's liberal gun laws, which gun-rights supporters say are protected by the Second Amendment of the U.S. Constitution.

"Although my grandfather and the other victims died at the hands of hate, this is proof, everyone's plea for your soul is proof, that they lived in love," Simmons said. "Their legacies will live in love so hate won't win. I just want to thank the court for making sure that hate doesn't win."

Also killed were Cynthia Hurd, 54, a public library employee; Susie Jackson, 87; Ethel Lance, 70, and Myra Thompson 59, an associate pastor at the church, according to the county coroner.

Watch: MAGA fan accuses CPAC organizers of bilking him out money to watch Trump from the 'overflow room'