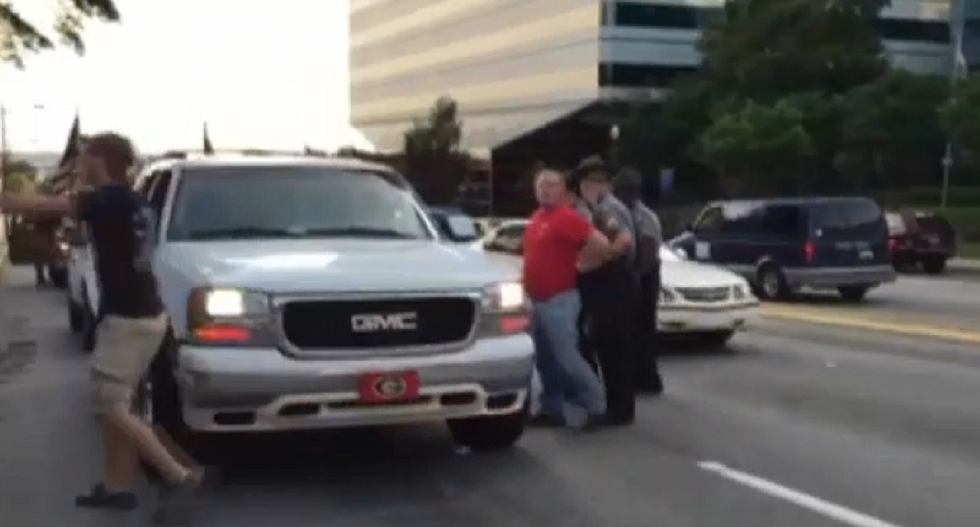 The Confederate flag still flying over South Carolina's state house has been the site of impassioned, continuing protests as calls to take it down have escalated. On Monday night, tensions flared into violence and rallies on both sides clashed in a brawl, the local CBS News station reports.

One man, Nicholas Thompson, 25, was arrested for disorderly conduct. Video from local station WIS shows him bringing his truck to a screeching halt, getting out and aggressively walking up to a group of anti-flag protesters. The group begins brawling, and shortly after, Thompson is taken into custody.

Nine African-American churchgoers were shot dead in a historically-black Charleston church this month, and the movement to remove the hate symbol became heated when pictures and a manifesto of white supremacist and suspected shooter Dylann Roof surfaced, showing him surrounded by Confederate flag imagery.

"That flag just does not deserve to fly at all in South Carolina and we want it down," one young African-American told the station.

And on the other side, a white youngster says, "Just because nine people lost their lives in a church in Charleston, which I'm not downplaying at all - still a tragedy, has nothing to do with that flag standing up there."

The KKK plans to hold a rally to keep the flag up on July 18, just one day after the month anniversary of the racist Charleston shooting, the Washington Post reports. Meanwhile on July 6, state legislators will meet to discuss removal of the flag, according to the Christian Science Monitor.

Rallies both against and in support of the flag have been held all week, with activist Bree Newsome scaling the state house flag pole and removing it on Saturday. Video from Monday shows trucks speeding along during a flag rally in Georgia rear ending each other, with the delighted onlooker quipping, "God don't like ugly."

Watch footage of the confrontation with Thompson from WIS here: