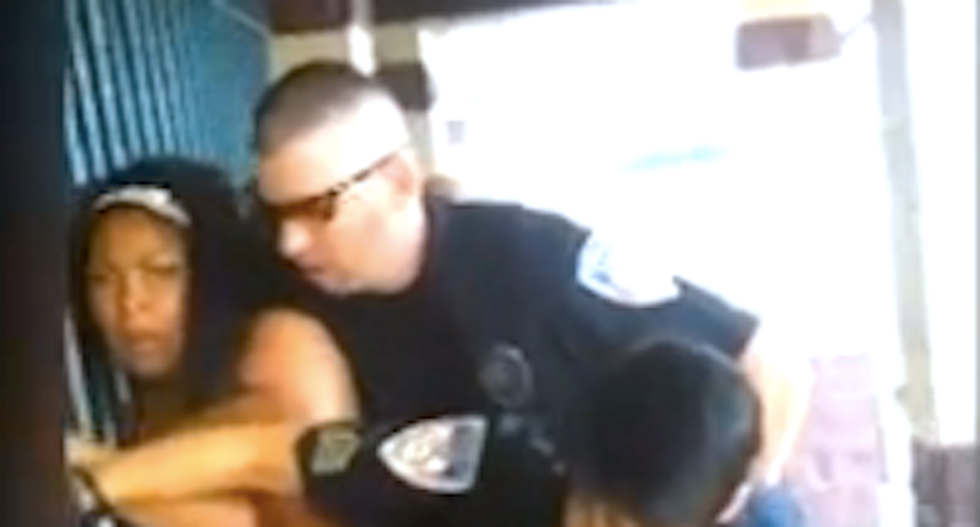 A video released on Tuesday showed police using pepper spray when arresting a group of black women and children at an Ohio pool, in an incident that has further fanned concerns about officers' use of force against minorities.

Last week, an officer from the police force in McKinney, Texas, resigned after a video that went viral showed him throwing a black bikini-clad teenage girl to the ground and pulling a gun on other black teens.

In the new incident, a cell phone video of the June 9 arrests at the Fairfield Aquatic Center near Cincinnati, published online by WLWT-TV, were cited by the family of Krystal Dixon as well as the police department to support differing views of the event.

WLWT said the incident began when pool staff asked the family to leave because one of the children was not wearing proper swimming trunks.

As the group is leaving, one of the officers grabs Dixon's arm, prompting the group to intervene, WLWT reported. Within minutes, several officers are struggling to detain the group.

The video shows one officer wrap his arm around the neck of a girl as he pushes her against a police cruiser, while another officer uses pepper spray on a woman resisting being handcuffed.

The girls can be heard screaming and crying throughout the video.

A separate surveillance video of the scene before the arrests, also published online by WLWT, showed what appeared to be the same group of minors surrounding and scuffling with officers.

Bobby Hilton, a Christian bishop who spoke on behalf of the Dixon family at a Tuesday news conference, railed against the police and said five people were taken to the hospital following the incident.

"These kids were terrified. This was a traumatic event," Hilton said.

Hilton said an unidentified man assaulted a 15-year-old in the group, while an officer injured a 12-year-old.

"I think the videos, including their videos, tell a different story. It's clear to me in the videos they were non-compliant," Dickey told the television station.

Krystal Dixon, Maya Dixon and a 15-year-old boy were cited with resisting arrest and disorderly conduct, and a 12-year-old girl was charged with assault and resisting arrest, WLWT reported.

The video comes amid a national outcry over police use of force against minorities. Police killings of unarmed black men in cities including Ferguson, Missouri, and New York City over the past year sparked waves of sometimes destructive unrest.

Watch video of the incident posted online by WLWT-TV: