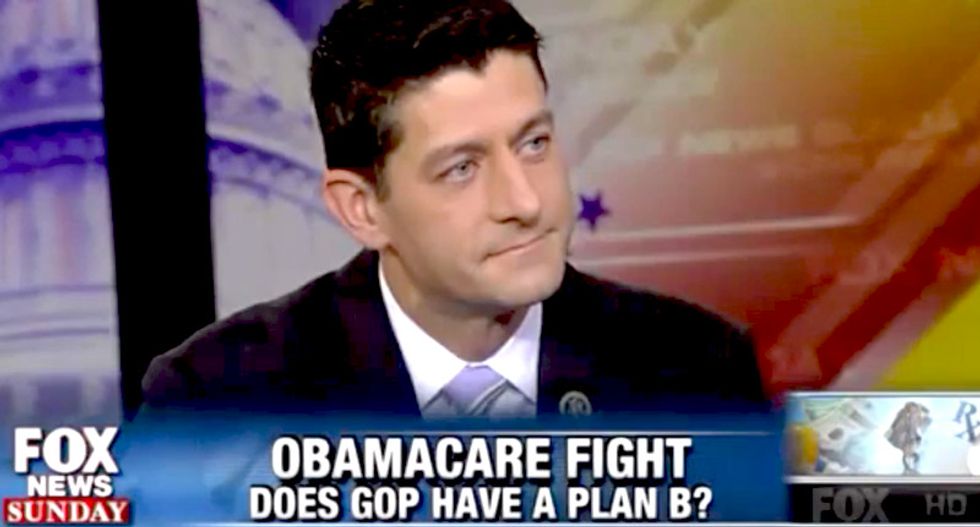 Arguing against all evidence that the Affordable Care Act (ACA) has benefited millions of Americans, a smug Rep. Paul Ryan (R-WI) told a skeptical Chris Wallace that the GOP has a plan should the Supreme Court invalidate the health care act.

Appearing with Wallace on Fox News Sunday, the former vice presidential nominee repeatedly refused to explain the details of the mysterious Republican replacement for Obamacare, even after the news host pointed out the the Republicans have had five years since the ACA was signed into law to provide an alternative.

“For all the complaints, we’re five years into Obamacare and Republicans have still not come up with a coherent plan that will ensure that all of those millions of uninsured people will get coverage,” Wallace said, only to have Ryan brush him off, saying the GOP wants to "see the details" of the upcoming Supreme Court ruling before unveiling their plan to the public.

Multiple times Ryan parried Wallace's questions, saying, "We will have an answer, we will have a solution," skipping every opportunity to provide even the simplest details of the Republican plan. Ryan instead insisted that that party only wants to give the American people "freedom from Obamacare," including the 16 million who gained coverage under the law, and the 129 million who no longer have to worry about losing coverage because of pre-existing conditions.

Watch the video below, uploaded to YouTube by Mediaite: