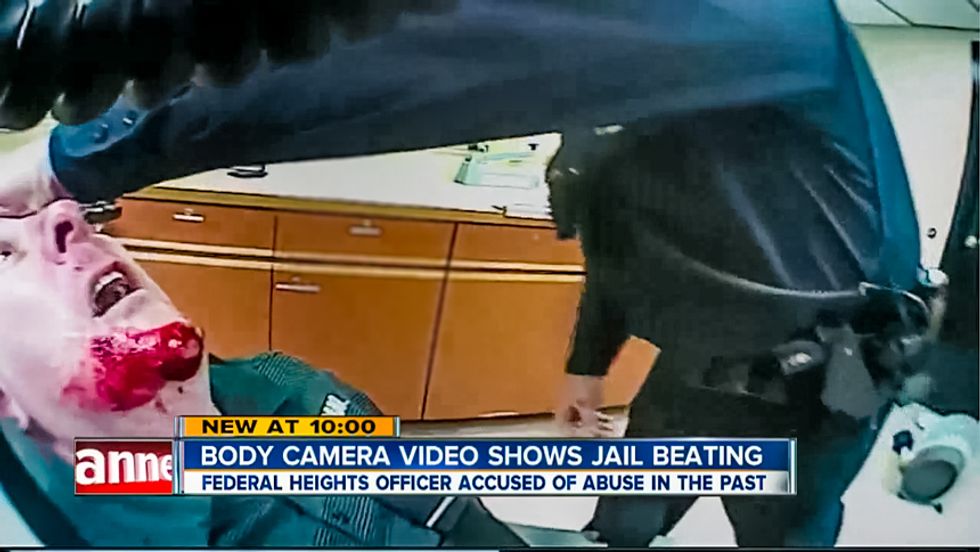 Video of the December incident obtained by KMGH shows Federal Heights Officer Mark Magness appearing to punch and kick a suspect while pulling him from a patrol car at the police station. A minute later, Magness slams the man into a concrete wall.

Video later shows Magness flying into a rage after the man lunges at him inside a holding cell. Another officer reminds Magness that he is being recorded by body cam video, but Magness continues to beat the suspect.

"I'm sorry sir," the bloody man says as he is thrown into a chair. Magness ignores him, pressing his fingers into his eyes and temples.

Although the man appears to be pinned into the chair, Magness accuses him of resisting and straps him down.

"We're going to need medical," the second officer calls out.

"I don't care, strap him to the chair," Magness says as the second officer again points to his body camera.

Dennis Discua told KMGH that Magness also used excessive force on him in 2009. The officer pleaded guilty to a misdemeanor and paid $517 in fines in that case.

"When I saw [this video] I remembered when he just grabbed me and I didn’t resist or nothing and he just pushed me and throw me all the way down," Discua recalled. "The police are supposed to help people, not hurt people."

The Federal Heights Police Department had not responded to a request for comment from KMGH. It was not clear if Magness had been suspended from the force.