'White privilege on steroids': CNN analyst goes down in flames lecturing activist on 'the black experience' 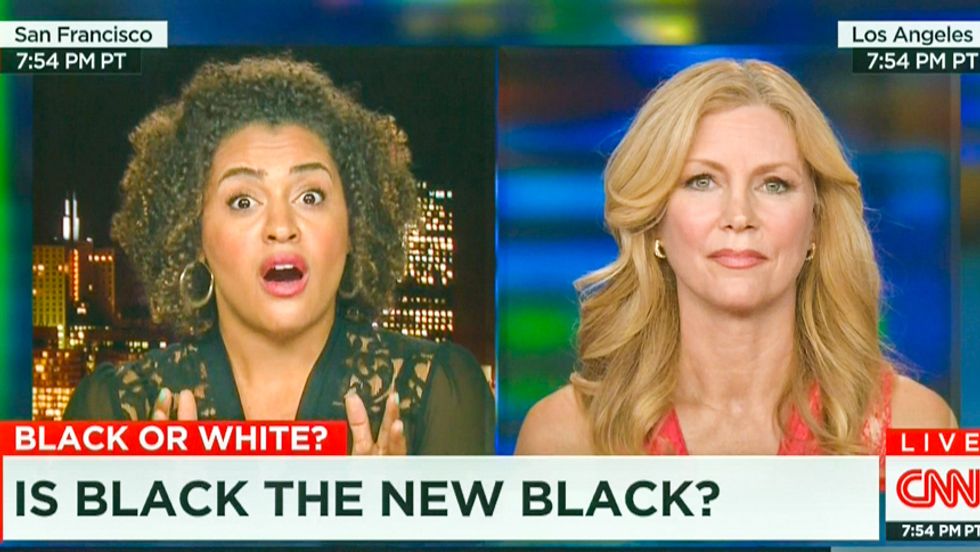 CNN Human Behavior Analyst Dr. Wendy Walsh, who is white, may have exposed her own white privilege on Monday when she suggested to an activist that she understood "the black experience" because she had multiracial children.

Alicia Walters, the founder of Echoing Ida, a collective of black women writers, explained to CNN's Don Lemon on Monday that former NAACP chapter president Rachel Dolezal could not claim to understand what it was like to grow up black just because she had a multiracial family and identified with black culture.

Walsh disagreed: "Her parents adopted four African-American children, sending the message that black is good, maybe even better because there are four of them and only one of you."

"I find that when people use the word appropriate, it's like a euphemism for stealing, taking something that's mine," Walsh opined. "Whereas, if an African-American straightens her hair and speaks without dialect, that might be connected to an African-American culture, nobody attacks that."

"Having the right hairstyle and knowing our history, thank you white people, more people should history, that does not make you black in this country," Walters replied. "It is deeper than that. And for somebody to say that simply wearing a hair style and performing blackness and that somehow speaking a certain kind of English means that actually you're not, you know, stereotypically black because those things belong to white people, that's incredibly offensive, it's incredibly ignorant."

Walsh, however, likened Dolezal to Caitlyn Jenner, who recently revealed that she identified as a woman after living most of her life as a man.

"Do you think when Bruce Jenner said, you know, I'm a woman I feel like a woman?" the psychotherapist remarked. "His therapist said, 'You're lying to me, you're not. I know you have a penis.'"

Walters argued that Dolezal was "making invisible all of the black people" that she had been trying to help with her civil rights work at the NAACP.

"How is she making them invisible?" Walsh replied. "I don't understand how that makes a group of people invisible to join them."

"If she comes forward and basically shows up having not lived the black experience, which is mind you a diverse set of experiences," Walters explained.

"And what is a black experience?" Walsh shot back.

"I would love to be able to point that to you, but I don't think you'll understand, Dr. Wendy," Walters lamented.

"But the point is, even to call somebody black, what does that say?" Walsh continued. "Can we just agree there's one race and it's the human race?"

"There's indeed the human race. And the way that United States has built the power structures of this country, race matters," Walters pointed out. "We're seeing it every single day at the same time that we're having a conversation about whether or not fundamentally black lives matter there is volatile and visceral experience of being black in this country that I have personally experienced."

"There is value to that and we must name it. It's not a hair style; it's not an affinity for music or a history. It's a lived experienced."

"You know, I talked to my biracial children about what race they are and they don't really care," Walsh opined. "I have every single color under the rainbow, and we had this discussion on the bus, and nobody cares about race. It's the last thing happening in our party bus right now."

"This said as black men are dying in the street," Walters concluded. "Wow."

Wendy Walsh just asked what is a black experience. Bc she has a multicultural family. She's clearly down.
— nicole (@nicole) 1434423357.0

WOW #WendyWalsh on CNN typically clueless, but doesn't know it #Whiteprivilege to speak w/ authority on things u know nothing abt.
— Kathleen Wells (@Kathleen Wells) 1434423664.0