Why Stannis isn't a pure villain on Game of Thrones 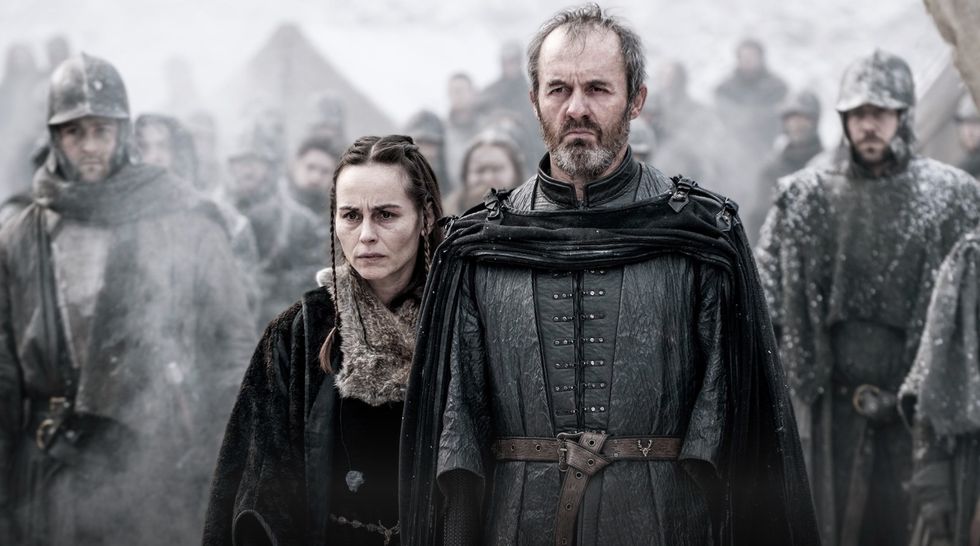 Book readers have long awaited Daenerys's flight out of Meereen on Drogon's back, but I have to say I didn't expect it to be overshadowed by Stannis doing something that hasn't happened (yet, anyway) in the books: Sacrificing Shireen to R'hollor in hopes of victory in the siege of Winterfell.

I have a few thoughts about this. As regular readers and video watchers know, I am strenuously trying to avoid reducing my take on this show to "here's how I feel" and leaving it at that. That is particularly boring when talking about Stannis killing Shireen, because obviously I feel terrible about that because everyone with a scrap of humanity in them feels terrible about that. Obviously, I hate Stannis now. You're supposed to, just as you're supposed to feel terrible about Sansa's situation. That is not the show fucking with you, but you feeling what the show runners want you to feel.

I saw some folks on Twitter justifying being mad at the show runners by saying this goes off-books. It's absolutely true that it does, from what's been published already. In the books, Shireen is still at the wall with her mother and Melisandre, so odds that she's going to be sacrificed to win the Battle of Ice hover around zero. However, that doesn't mean that she isn't going to be burned alive. However, it's implied by show runners D.B. Weiss and David Benioff that this is coming in the books because, well, George R.R. Martin suggested this plot development.

With that in mind, some speculation. There's three things that have happened in the books that I think are about to converge and cause Shireen's death by fire:

1) Melisandre is beginning to key into the fact that Stannis may not be, as she assumed, Azor Ahai, and that Jon is. She's seeing Jon in the flames when she asks to see Azor Ahai, and while she can be a bit stubborn at times, eventually she is going to figure this out.

2) The only person left at the Wall with king's blood is Shireen, because Jon, afraid she would burn them alive, sent away Aemon and Mance's baby.

Taken together, here's what I think is going to happen: Melisandre is going to figure out Jon is Azor Ahai and will be, of course, very eager to resurrect him. She'll think she needs king's blood for that spell. Since she doesn't have Mance's baby or Aemon to kill, she'll go for Shireen, justifying it as necessary to save the world.

Which means, in classic tragedy fashion, Jon will bear some responsibility for what happens. Not that it's ever cool to kill anyone, but he did set up a situation where the only person left is the person whose death will be the most tragic. Aemon is on his deathbed anyway and Mance's baby doesn't even have a name yet. Shireen, on the other hand, is a fully formed young person with a name and a life and a personality and, it's suggested, she would make a great leader if she ever ascended. Losing her is, for their world, the bigger tragedy than losing an elderly person or a baby in a world where infant mortality rates are high. Everything is coming together to make Jon's resurrection the most painful thing possible. Just a thought.

It's interesting and I think brave for the show to put the moral responsibility at Stannis's feet. Audiences were beginning to like Stannis, and it was time for a reminder that his devotion to religious fanaticism and his own ego override his basic sense of morality. Remember, Stannis is a kinslayer already, having killed his brother Renly. And Stannis was about to kill Gendry.

Not that liking Stannis was wrong. I like Stannis! Stannis, until he killed his daughter, had a lot of things to like about him: He's competent, no-nonsense, pragmatic and inarguably brave as fuck. But that's why I like this show and these books. People are not good or bad, but human. Sometimes the very things that make you admirable in one circumstance---such as a willingness to do whatever it takes to win---make you a monster in others.

In this sense, the show has made a choice that fits perfectly with the themes of the book. A Song of Ice and Fire is full of characters who feel torn between love and duty. While it feels very easy for us in the audience to cheer for love in those circumstances, it's just not so simple as that. Rhaegar and Lyanna chose love and it led to a war that put Robert on the throne, when Rhaegar would have been a better king. On the flip side, Ned chose love over duty in protecting Jon, and it was a choice that might save the world. So it's not one thing or the other. It makes you sympathize with the characters because, like real people, they face choices in which there is no easy way to know what to do.

There are implications for Daenerys's storyline, which you should watch the video to learn.