Why the hell is Stephen Colbert dressed up like Toby Keith? Find out here 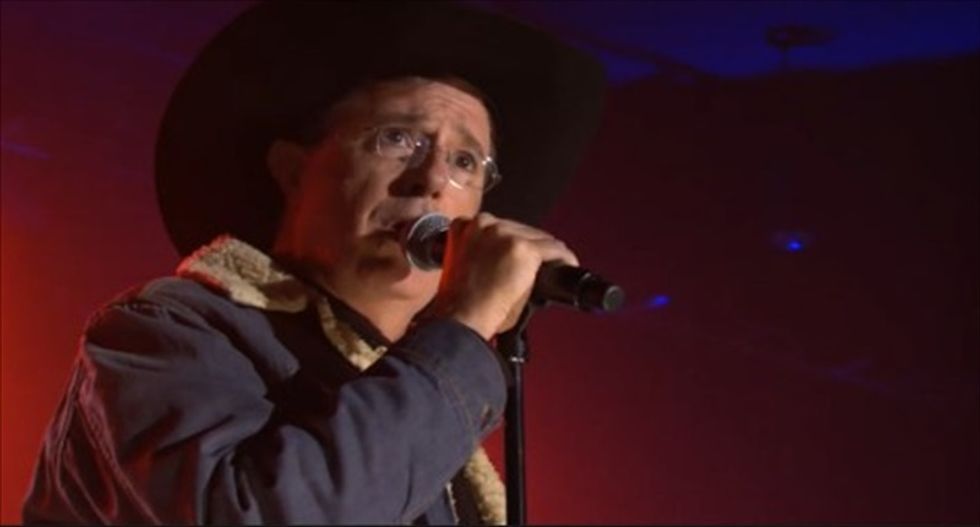 Stephen Colbert covers Toby Keith's "As Good As I Once Was" at the Songwriters Hall of Fame ceremony on Thursday. [Vulture]

Stephen Colbert made a surprise appearance at the Songwriters Hall of Fame induction ceremony on Thursday night, as he not only honored country singer Toby Keith, but covered one of his songs, Vulture reported.

During his remarks, Colbert recounted Keith's first appearance on his former program, The Colbert Report, on Sept. 12, 2006.

"My favorite part of the night was, as the big dog was leaving out the stage door and I was going to the rewrite room -- this is very early on in my show, and he didn't know what he was in for, I guess — he turned around to me and he said, 'Hey, man, you do a great job, whatever the f*ck it is you do,'" Colbert recalled. "I was sincerely deeply moved by that moment, so much so that my executive producer -- this is true -- had it stitched on a pillow for me for Christmas."

He also addressed perhaps the most pertinent question of the evening.

"It's entirely possible there are people asking, 'Why the hell is Stephen Colbert honoring Toby Keith?' the new Late Show host said. "Well, I don't know why I was asked to be here tonight, but I will tell you why I showed up: because Toby has always showed up for me."

For his part, Keith told ABC News Radio that, had he not become a singer himself, he still would have amassed his body of a work as a songwriter and "shoved those songs down somebody's throat."

"I don't know if people know that I wrote all that stuff, but I outworked everybody," he said. "I put a[n] album out every year, I wrote 99 percent of it and this is the reward you get. And this is the only award I ever wanted. Entertainer of the Year and all the other stuff I got -- Album of the Year, Vocalist of the Year -- I don't care. This is the one I wanted."

Watch an excerpt of Colbert singing Keith's song "As Good As I Once Was," as posted by Vulture, below.

And Keith's first appearance on the Report, as posted by Comedy Central, can be seen here.