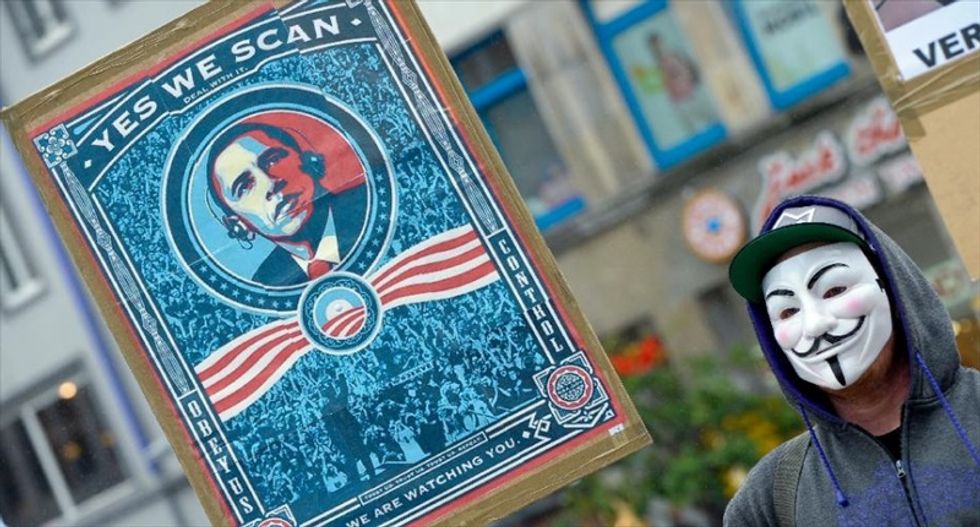 A protestor holds a banner with a picture of President Barack Obama to protest against the NSA internet surveillance program "PRISM" on June 29, 2013 in Hanover. Photo by Peter Steffen for Agence France-Presse.

The spying spanned 2006 to 2012, French newspaper Liberation and the Mediapart website said, quoting documents classed as "Top Secret," which also revealed that Hollande approved secret meetings on the consequences of a Greek exit from the eurozone as early as 2012.

The revelations prompted the French leader to call a defence council meeting first thing Wednesday "to evaluate the nature of the information published by the press on Tuesday evening and to draw useful conclusions," said one of his aides.

Among the documents are five from the US National Security Agency, with the most recent dated May 22, 2012, just days before Hollande took office.

It claims the French leader "approved holding secret meetings in Paris to discuss the eurozone crisis, particularly the consequences of a Greek exit from the eurozone".

The same file also alleges that the French leader went behind German Chancellor Angela Merkel's back to schedule meetings in Paris with members of the Social Democrats -- Germany's main opposition party then.

Another document, dated 2008, was titled "Sarkozy sees himself as only one who can resolve world financial crisis", and said the former French president "blamed many of the current economic problems on mistakes made by the US government, but believes that Washington is now heeding some of his advice".

Chirac's choice for appointments at the United Nations was meanwhile the subject of a file dated 2006. In that same document, then foreign minister Philippe Douste-Blazy was described as someone who has the "propensity... for making ill-timed or inaccurate remarks".

Neither Hollande's office nor Washington would comment on the information.

Contacted Tuesday by AFP, Hollande's aide said: "We will see what it is about".

US State Department spokesman John Kirby meanwhile said: "We do not comment on the veracity or content of leaked documents".

But Sarkozy's aide blasted the alleged spying as "unacceptable methods as a general rule and more particularly between allies".

Germany was particularly ticked off, as data privacy is a sensitive subject for Germans, haunted by historic surveillance by the Nazis and ex-communist Stasi secret police.

The spy claims had led to the most strained US-German relations since the 2003 US invasion of Iraq.