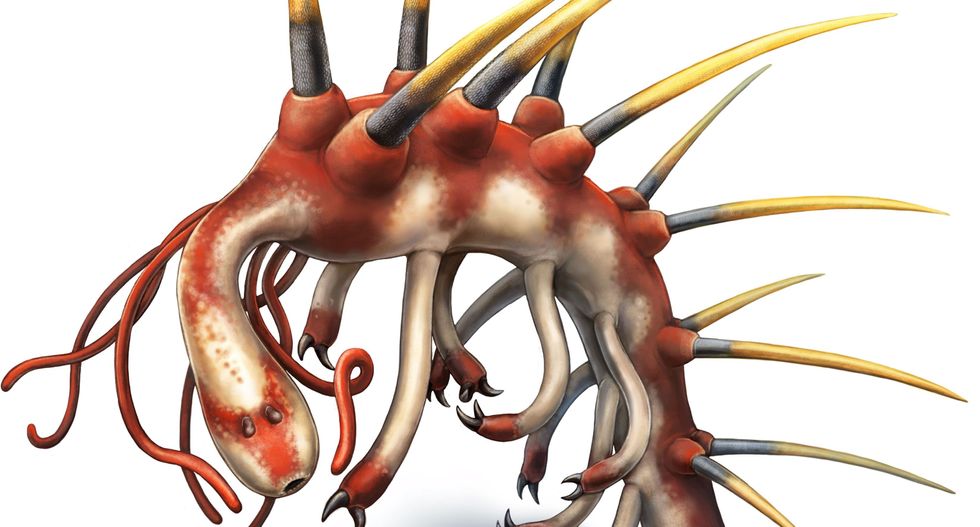 An artist's colour reconstruction of Hallucigenia sparsa is shown in this image released to Reuters on June 23, 2015. REUTERS/Danielle Dufault/Handout

It was a creature so strange that experts literally could not make heads nor tails of it.

But scientists said on Wednesday a new analysis of fossils of Hallucigenia, so named for its fantastical appearance, has given them for the first time a complete understanding of this little sea oddball that lived about 508 million years ago.

Hallucigenia is one of the species emblematic of the Cambrian Period, a pivotal juncture in the history of life on Earth when most major groups of animals first appeared and many unusual body designs came and went.

"It is nice to finally know rather fundamental things such as how many legs it has, and to know its head from its tail," University of Cambridge paleontologist Martin Smith said.

Hallucigenia, whose fossils have been unearthed in the Burgess Shale site in the Canadian Rocky Mountains, belongs to a primitive group of velvet worms, animals that still exist today.

Hallucigenia, 0.4 to 2.2 inches long (10-55 mm), possessed seven pairs of nail-like spines protruding from its back, with an equal number of pairs of long, flimsy legs underneath tipped with claws. There were three pairs of skinny tentacles toward the head, perhaps used to process food or as antennae.

Hallucigenia has long baffled scientists. In the 1970s, it was thought its back spikes were legs, its legs were tentacles along its back and its head was its tail.

"The head was once thought to be represented by a large balloon-like orb at one end of the animal. We can now show that this orb was not part of the animal at all, but a blob of decay fluids that oozed out of the anus during decay and burial," Smith said.

The actual head, the scientists have now learned after using sophisticated imaging techniques on the fossils, is at the end of a long and slender neck resembling a hose-like tube. Near the end of the head were two bean-shaped eyes.

"Below the eyes, like an almighty grin, sits a ring of teeth," Smith said.

There was a small mouth cavity in front of these teeth to suck food into the throat. Once there, the food was gripped by tiny needle-like teeth lining the throat to speed it to the stomach.

"It would have been quite a sight," said Royal Ontario Museum paleontologist Jean-Bernard Caron.

The research appears in the journal Nature.