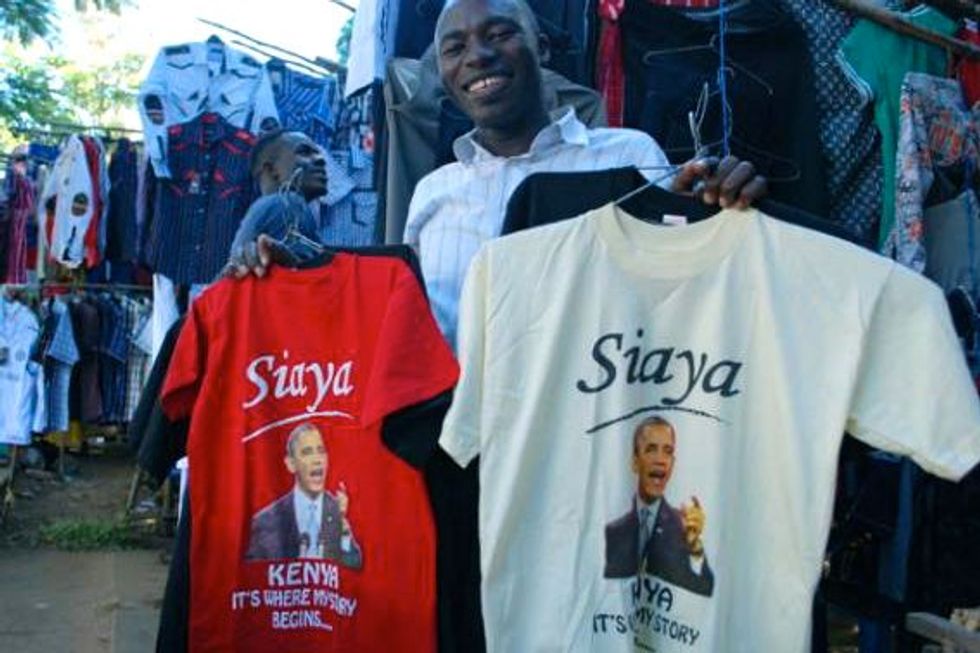 AFP/AFP/File - Kenyan clothing vendor Hosea Owuor displays t-shirts featuring an image of US president Barrack Obama at his stall in Kisumu on July 8, 2015 ahead of Obama's visit to Kenya

"It's a business," said Hosea Owuor, a 30-year-old market trader on Kisumu's Achieng Oneko Road. "Obama is a brand."

Owuor hopes to cash in on President Barack Obama's visit to Kenya this month, ordering 400 t-shirts with a smiling portrait of the US leader, whose father was born in a rural village in the country's west.

Obama's paternal line, reaching from a tiny African village to the White House in a single generation, is a source of immense pride for many Kenyans.

Barack Obama Senior grew up in the village of Kogelo before studying in the United States, where he met and married Obama's mother Ann Dunham, the second of four women with whom he fathered children.

The couple soon separated and Barack Sr. became an absentee father. It wasn't until after his father's death in a car crash in Nairobi in 1982 that Obama visited Kenya for the first time in search of his roots. He bonded with his Kenyan relatives in a journey retold in the memoir 'Dreams from my Father'.

Said Obama, the president's 49-year-old uncle -? son of Obama's late grandfather Hussein Onyango and his step-grandmother Sarah, who still lives in Kogelo -? remembers his nephew's earliest visit to Kenya in 1987.

"Barack used to come here, sneak into the village without people noticing. We were in Nairobi driving in the matatus (mini-buses), going to places like Mathare (a slum), jumping over sewers, and nobody noticed," he said.

When Obama went into politics his anonymity evaporated, as did his Kenyan family's privacy. "Kogelo was just a sleepy village, nobody knew about it," said Said. "His coming to power has really put Kogelo on the world map."

Obama's last visit to Kenya, as a US Senator in 2006, was a circus; his election victories were loudly cheered in Kenya, and his visit this weekend promises to be a madhouse of jingoistic celebrations and reflected glory as Kenyans wilfully forget that Obama isn't actually Kenyan.

Owuor, the souvenir t-shirt seller, said proudly that, "The story of Obama is when he was young he was born in Siaya," the Kenyan county in which Kogelo lies -- half a world away from Hawaii, where Obama was actually born.

In the village itself, Manasseh Oyucho, headmaster of the Senator Obama Kogelo Primary School, excitedly listed Obama's heritage as "a Kenyan, a Luo, a Kogelo!" as if he were born in the tiny village of 3,000 people on a lush plateau overlooking the rolling farm-covered hills.

Like everyone else in Kogelo, the 56-year old teacher thanks Obama for recent changes.

"When he became president that's when we got the tarmac road and good water for drinking. This school got two classrooms, an office and a store. We got a police station. These things are coming because of him!" said Oyucho.

Grid electricity reached Kogelo for the first time hours after Obama won the 2008 presidential election. A paved road and piped water followed soon after as the Kenyan government suddenly paid attention to the neglected village.

"President Obama has changed this village," said Nicholas Rajula, owner of the Kogelo Village Resort, an expanding hotel built to accommodate visitors to Obamaland, as Kogelo is sometimes known.

"In our culture we say everybody who comes to see (the president's step-grandmother) Mama Sarah are Barack Obama's visitors, so it is my duty as a village mate, as a cousin, to take care of his guests while he is away," said the 55-year old businessman.

"Of course they are paying, they are not staying for free," he added quickly.

Rajula believes the spotlight Obama's presidency has shone on Kogelo will outlast his term in office. "Everybody still goes to Jerusalem to see where Jesus was born, so Kogelo, long after Obama will have left the presidency, people will be coming here," he said.

Obama is a source of pride and profit for many, but for the Kenyan Obamas he is family.

"He calls me uncle; I call him Barry," Said laughed. "That's not to say I don't see him as a president, only that our relationship started much earlier than his presidency."

Sarah Obama, the president's 94-year-old step-grandmother, is the matriarch of the family. She is "Mama Sarah" to Kenyans, and "granny" to Obama.

Sitting on a plastic chair beneath a mango tree just a few metres from the newly refurbished graves of her husband and son in the family compound in Kogelo, Sarah said Obama is learning the local Luo language that she speaks.

"I will greet him and he will greet me in the language he knows. He'll ask me: 'Idhi nade, dani?'" which means 'How are you, granny?'

Seven years ago local expectations of material benefits from the Obama presidency were high in western Kenya because of the country's political culture of nepotism and corruption, whereby politicians enrich themselves and their communities first.

"He is answering to the people of the US but some of us here thought that he was going to use the resources at his disposal to develop this place, which was not realistic," said Said.

Hopes of a windfall have faded but still, Obama continues to inspire.

"What he has proved to many Kenyans (is) that despite his humble background he could rise to become one of the most powerful people in the world," said Said.