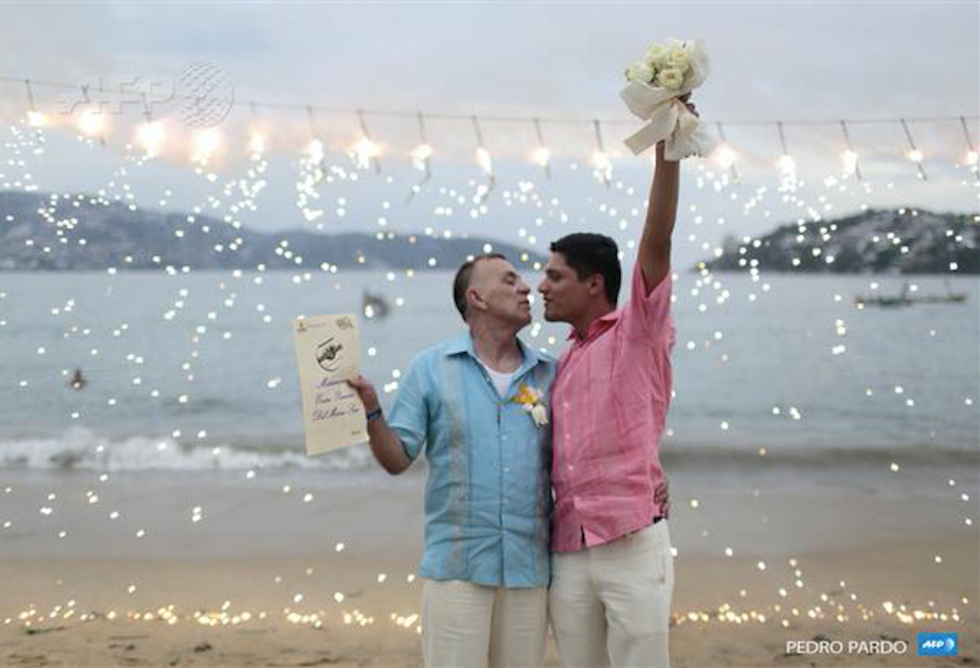 Twenty gay and lesbian couples got married in a mass wedding on an Acapulco beach on Friday, one month after Mexico's top court all but legalized same-sex marriage nationwide.

With Guerrero state's governor and wife as witnesses, the 15 male and five female couples exchanged vows as the sun set, surrounded by some 200 people in a celebration that included cake and a mariachi band.

"It's a big step. It's something I have always wanted since I was very little and I wanted to start a family," said Alejandra Jimenez Soler after she married a hotel worker whom she had been dating for more than year.

Holding a bouquet of roses, the 17-year-old Acapulco resident was among the youngest people to get married.

Despite her youth, Jimenez said she took a "responsible, mature, reasoned" decision in the face of her family's disappointment with her homosexuality.

"I feel terrible that my family isn't here to support me because they should accept you as you are," she said.

View galleryTwenty gay and lesbian couples have married in a mass …

Twenty gay and lesbian couples have married in a mass wedding on an Acapulco beach, one month after …

Under the theme of "Guerrero, to love is a right," the mass ceremony was sealed with a toast, a wedding cake and kisses as the mariachis played cheerful music.

Governor Rogelio Ortega promoted the mass wedding despite opposition from some politicians and the Roman Catholic church.

Mexico's expansion of gay marriage -- it was already legal in Mexico City and two of 31 states -- preceded a US Supreme Court ruling that legalized same-sex unions throughout the United States.

Mexico's top court opened the door to same-sex marriage through the country of nearly 120 million people on June 3, when it ruled that it was unconstitutional for states to ban them.

While the "jurisprudence" issued by the court does not oblige states to change their laws, it requires courts to rule in favor of same-sex couples whose marriages were rejected.

But the civil registry went along with the governor's orders and approved Friday's marriage licenses.

"We respect all beliefs because we are inclusive when it comes to civil rights," Ortega said during the ceremony.

Mexico City was the first jurisdiction in Latin America to legalize same-sex marriage in 2010.

Argentina, Brazil and Uruguay have since made gay marriage legal, too, while religiously conservative Chile approved same-sex civil unions this year.