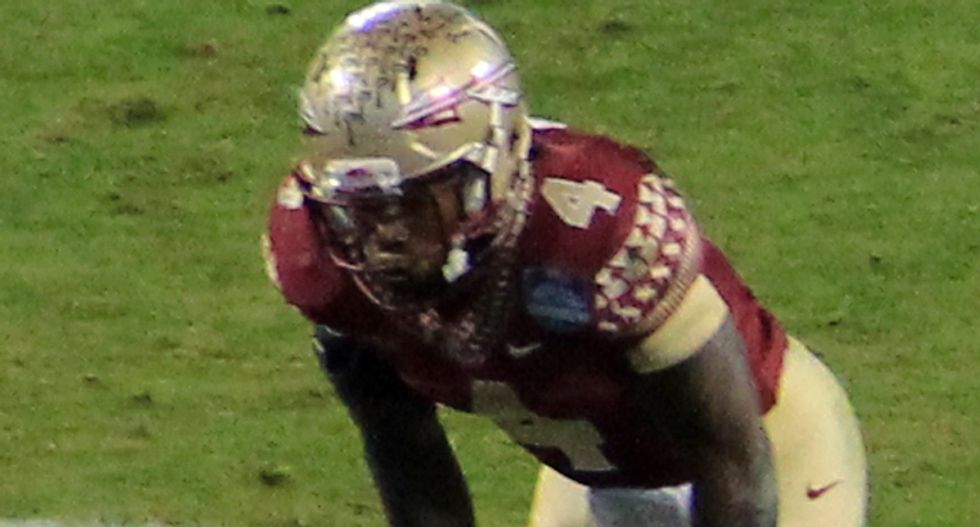 Prosecutors are seeking the arrest of Florida State University football player Dalvin Cook for allegedly punching a woman in the face. The running back is the second player on the team to face assault charges this week.

Cook, a sophomore, allegedly punched a 21-year-old woman in the face several times outside a Florida bar on 23 June, the night before FSU quarterback De’Andre Johnson was caught on camera punching a woman inside a different bar.

Cook, 19, face charges of misdemeanor battery, state attorney Willie Meggs told ESPN . Johnson, 19, was charged with battery earlier this week. He was dismissed from the football team hours after Meggs released video of his altercation.

The Tallahassee woman who has accused Cook showed authorities photos of her injuries and described the assault as the consequence of an argument over a phone number. When she refused to give one of Cook’s friends her number outside the Clyde’s & Costello’s bar, she said, Cook grew angry and punched her several times. The woman spoke to ESPN on condition of anonymity.

A police report acquired by the Tallahassee Democrat noted that officers arrived at the scene shortly before 2.30am on 23 June. The redacted report said the victim suffered abrasions and bruises and was intoxicated. Two witnesses saw the incident, according to the report, which does not name a suspect. The woman said she later identified Cook from a lineup.

A spokesperson for FSU said the university had no comment at this time. Meggs was not immediately available.

Last June, police questioned Cook and at least dozen other football players over a series of shootouts involving gas-charged pellet and BB guns that damaged cars and apartments around Tallahassee and threatened bystanders, provoking a response that included police cruisers and a helicopter. A month later, Cook was investigated in an assault case at the athlete’s apartment.

Cook was a major contributor to FSU’s 2014 season, with more than 1,000 yards rushing and eight touchdowns.

Florida State had the second most athletes named in criminal allegations between 2009 and 2014, according to an investigation by ESPN that found college athletes avoided prosecution some 66% of the time. Of 10 schools with major football and basketball programs, only the University of Florida had more.

Johnson has pled not guilty and his attorney told NBC’s Today show that while his client was “owning this”, he had been provoked into striking the woman in the bar after “racial epithets” and a knee “in the groin area”.

In 2013, star FSU quarterback Jameis Winston was accused of sexual assault . He was eventually cleared in 2014, and filed a counter-claim against his accuser in 2015. The police investigation into the charges was itself surrounded by claims of mismanagement and deference to the status of FSU and its athletes.

Winston was separately suspended from a football game for shouting about a sex act on campus and suspended from the baseball team for shoplifting crabs legs from a supermarket.

He is now signed to an NFL franchise, the Tampa Bay Buccaneers.