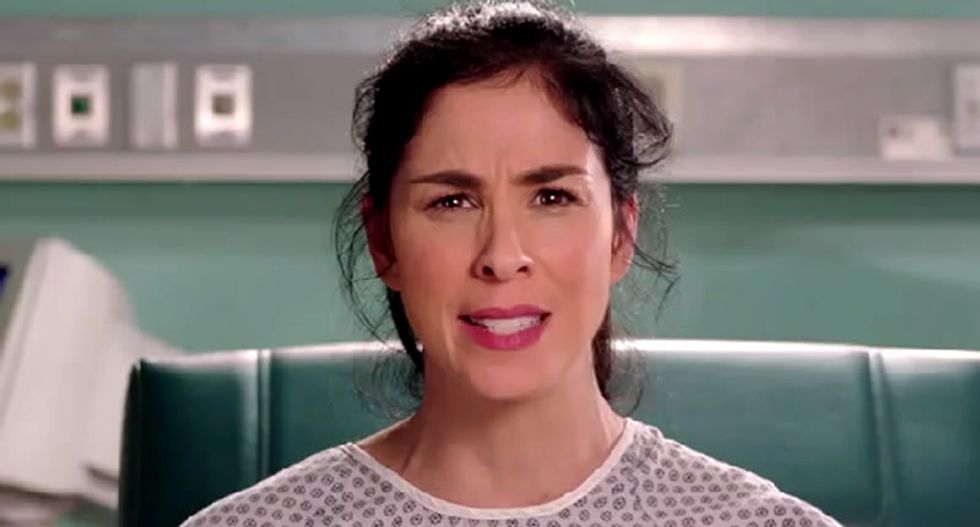 An organization dedicated to producing anti-Planned Parenthood propaganda has accused Jewish comedian Sarah Silverman of being a Nazi sympathizer because Silverman supports the women's healthcare provider.

Live Action News, the media arm of Live Action, a group founded by anti-abortion activist and misleading sting video extraordinaire Lila Rose, wrote Wednesday that Silverman, whom they refer to as an "alleged comedian," used the same logic to defend Planned Parenthood that Nazis used to experiment on dead prisoners during World War II.

Silverman, a vocal feminist and supporter of women’s reproductive rights, tweeted in response to edited “undercover” videos produced by the Center for Medical Progress. The non-profit group is associated with Rose and their videos paint Planned Parenthood as a mafiosi organization wildly profiting off baby parts:

Abortion is still legal in the great U.S of A. It would be insane not to use fetal tissue 4 science & education in such cases. #StandwithPP
— Sarah Silverman (@Sarah Silverman) 1438050389.0

According to scientists who spoke to the New York Times this week, she is right. Many of the researchers asked the Times to withhold their names because they had received threats for their work researching fetal tissue.

Stem cells derived from fetal tissue is crucial in the study of diseases and disorders because, as one scientist told the Times, "if you want to understand how a tissue or a disease develops, you should go back to the beginning."

Most of the Live Action article, unsurprisingly, is factually incorrect. It claims that tissues used in research were not "donated." Actually, fetal tissue can't be used without the mother's consent, according to the Times.

"But wait, you might say, parents can make the decision to donate for children too young to consent," writes Calvin Freiburger for Live Action. "Is this any different?...[Y]ou can only make [this analogy] conceding that the abortion seeker is indeed a parent to what she wants aborted…raising deeply problematic questions about what she and Planned Parenthood are doing in the first place."

We're not gonna go through the same nonsense we went through to use stem cells for research are we? Science is real Dolls #StandwithPP
— Sarah Silverman (@Sarah Silverman) 1438050501.0

"Poor Sarah must not have been paying attention when destroying embryos to obtain stem cells was declared obsolete way back in 2009, or last year when Harvard researchers demonstrated a new method for giving adult stem cells the useful traits of embryonic ones, no killing necessary."

But Freiburger didn't read the articles he linked to apparently. Both indicate that while new science on the horizon may soon render research using fetal stem cells unnecessary, it's not quite there yet, which is what scientists also told the Times.

Silverman's string of tweets resulted in this interaction with conservative commentator Ben Shapiro:

Freiburger then directly compares Silverman to a Nazi.

"As National Review pointed out over the weekend, the Nazis really did use the same logic, with German scientist Julius Hallervorden commenting in 1945 at the Nuremberg trials, "If you are going to kill all these people, at least take the brains out so that the material may be utilized," he writes.

The Nazis embarked on a racist eugenics campaign to exterminate people they didn't believe fit their vision of ideal humanity.

Planned Parenthood is a non-profit organization that provides a wide variety of essential health care services to low-income women. Abortion only accounts for three percent of their procedures, according to the New York Times.

In a Wednesday editorial, the Times attacked "heavily edited" videos meant to mislead people about what Planned Parenthood does.

"[I]t is dishonest and cowardly to use heavily edited video and subterfuge to portray Planned Parenthood as something other than what it is," Times editor Anna North writes. "It reveals an unwillingness to engage with the real issues and a willingness to mislead others to gain their support."