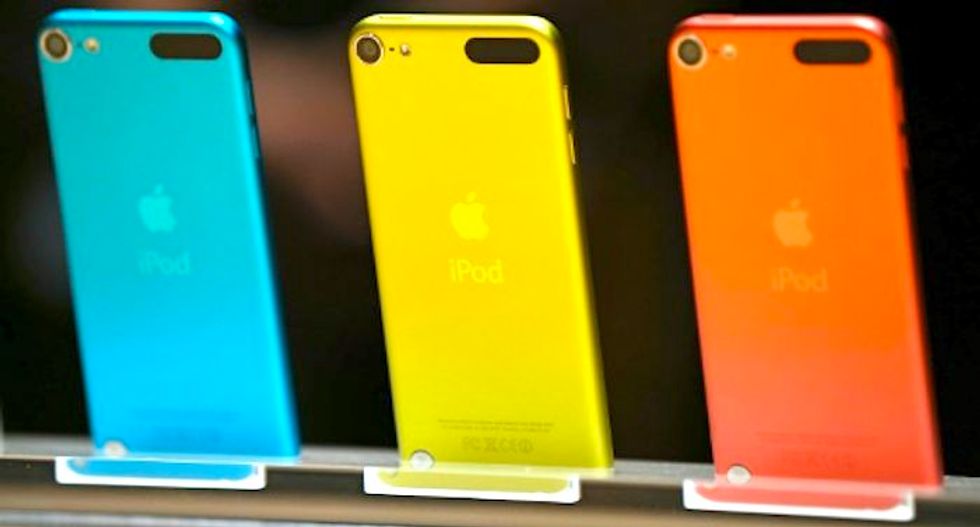 A row of Apple iPhones. [AFP]

Apple released a new iPod touch that boasted improved cameras, speedier graphics and better fitness tracking capabilities. The iPod touch, essentially an iPhone without the costs or benefits of cellular network connections, had a starting price of $199.

"With big advancements like the A8 chip and the 8 megapixel iSight camera, customers can experience next-level game-play, take even more beautiful photos and enjoy their favorite music, TV shows and movies."

The upgrade defied speculation that Apple might back away from iPods, which have seen declining sales as buyers snap up iPhones.

The iPod touch is seen as a tempting option for families that want to let children connect with music, games and other online content using mobile devices but be spared costly telecom service bills.

Getting more iPods in people's hands would broaden the potential audience for Apple's new streaming service that went live at the end of June with a flashy radio station and artist exclusives.

Apple Music got started with the tech giant in the unusual position of being on the back foot, as Spotify leads the fast-growing market for streaming which offers on-demand, unlimited music.

The service is betting big on celebrity names to draw attention and scored a coup when pop superstar Taylor Swift agreed, after a heated dispute, to stream her blockbuster album "1989" only on Apple Music.

The centerpiece of Apple Music is Beats 1, which bills itself as a first global radio station, and will include guest hosts such as pop legend Elton John and rap entrepreneur Dr. Dre.

The radio station will remain free, even for users who do not pay the $9.99 a month to stream artists, and Apple has made the service integral to its latest operating system on iPhones.

Another feature is called Connect, which lets artists post messages -- keeping listeners on Apple Music rather than switching to social media.

Apple is going up against a crowded field led by Spotify, the Swedish streaming leader that says it has 75 million active users, of whom 20 million pay.

Other competitors include Deezer, Google Play, Rhapsody and Tidal, which was relaunched earlier this year with mixed success by rap mogul Jay Z.