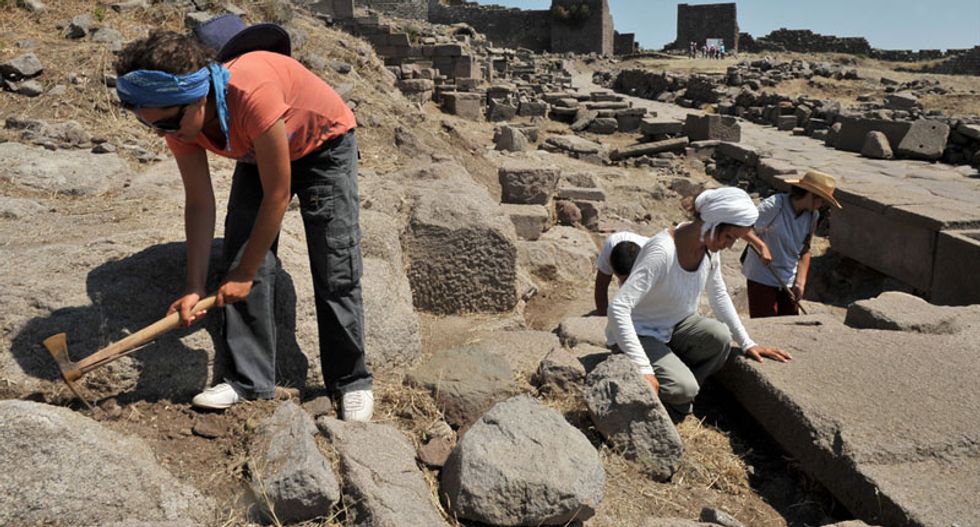 Archaeologists and summer students at excavations at the Apollon Smintheus temple near Assos in Turkey on July 22, 2011 (thomas koch / Shutterstock.com)

Israeli archaeologists have uncovered dramatic evidence of what they believe are the earliest known attempts at agriculture , 11,000 years before the generally recognised advent of organised cultivation.

The study examined more than 150,000 examples of plant remains recovered from an unusually well preserved hunter-gatherer settlement on the shores of the Sea of Galilee in northern Israel.

Previously scientists had believed that organised agriculture in the Middle East, including animal husbandry and crop cultivation, had begun round in the late Holocene period – around 12,000 BC – and later spread west through Europe.

The new research is based on excavations at a site known as Ohalo II, which was discovered in 1989 when the lake water in the sea of Galilee dropped because of drought and excessive water extraction.

Occupied by a community of hunter-gatherers at the height of the last ice age 23,000 years ago, it revealed evidence of six brush huts with hearths as well as stone tools and animal and plant remains.

A series of fortuitous coincidences led to the site’s preservation.

The huts had been built over shallow bowls dug by the occupants and later burned. On top of that a deposit of sandy silt had accumulated before the rising lake had left it under 4 metres of water.

The study looked for evidence of early types of invasive weeds – or “proto-weeds” - that flourished in conditions created by human cultivation.

According to the researchers, the community at Ohalo II was already exploiting the precursors to domesticated plant types that would become a staple in early agriculture, including emmer wheat, barley, pea, lentil, almond, fig, grape and olive.

Significantly, however, they discovered the presence of two types of weeds in current crop fields: corn cleavers and darnel.

Microscopic examination of the edges of stone blades from the site also found material that may have been transferred during the cutting and harvesting of cereal plants.

Professor Ehud Weiss, head of the archaeological botany lab at the Department of Land of Israel Studies, told the Guardian: “We know what happened ecologically: that these wild plants, some time in history, became weeds. Why? The simple answer is that because humans changed the environment and created new ecological niches, that made it more comfortable for species that would become weeds, meaning they only have to compete with one species.”

According to Weiss, the mixture of “proto-weeds” and grains that would become domesticated mirrors plant findings from later agricultural communities.

The site also revealed evidence of rudimentary breadmaking from starch granules found on scorched stones, and that the community may have been largely sedentary, with evidence of consumption of birds throughout the year, including migrating species.

“This botanical find is really opening new windows to the past,” Weiss said. “You have to remember Ohalo is a unique preservation. Between Ohalo and the beginning of the Neolithic we have a blank. And when the early Neolithic arrives people start [agriculture again] from scratch.

“We’re not trying to say cultivation and an agricultural way of life started in Ohalo and then continued to the Neolithic. You can’t say that. What you can say is that this was perhaps a trial cultivation from which we can understand how humans were always sophisticated, trying to push borders and make life better.”