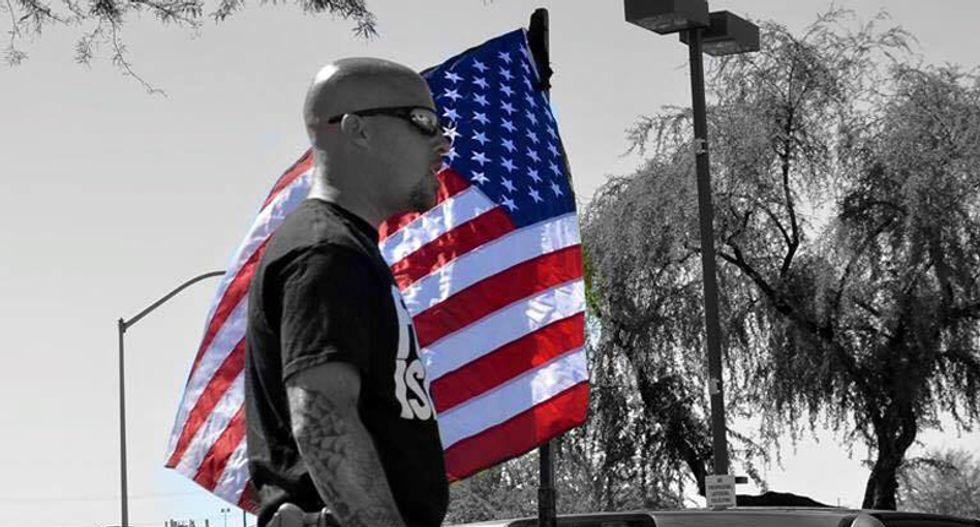 The man who led an anti-Muslim rally at a Phoenix mosque in May, only to later launch an ill-fated attempt to raise $10 million online after he claimed his life was in danger, showed up for a pro-Confederate flag rally at a local Walmart.

According to AzCentral, Jon Ritzheimer made an appearance at a noisy protest Sunday in Phoenix to denounce Walmart for pulling Confederate-flag merchandise from its shelves.

Ritzheimer's rally last May fizzled,but he used the opportunity to sell "F*ck Islam" t-shirts, landing him a spot on CNN with Anderson Cooper who criticized the protest organizer for bringing guns to the mosque.

On Sunday, Ritzheimer joined an apparently confused "patriots" group waving both American and Confederate flags while chanting "U-S-A" at the Walmart location before the store management asked them to move their protest elsewhere.

Counter-demonstrators confronted the group and Ritzheimer got into an altercation with one man, wrestling away an American flag the young man was standing upon after shouting that it was disrespectful to veterans.

Ritzheimer then dusted off the flag and flew it alongside a Confederate flag as cars drove by honking their horns.

According to police about 100 protesters showed up for the flag display, with one woman -- a recent transplant from Georgia -- saying she was surprised by what she saw.

"I didn't know it was a hatred show," she said. "It wouldn't surprise me if this happened in Georgia, but I was shocked to see it in Arizona. It's very sad."