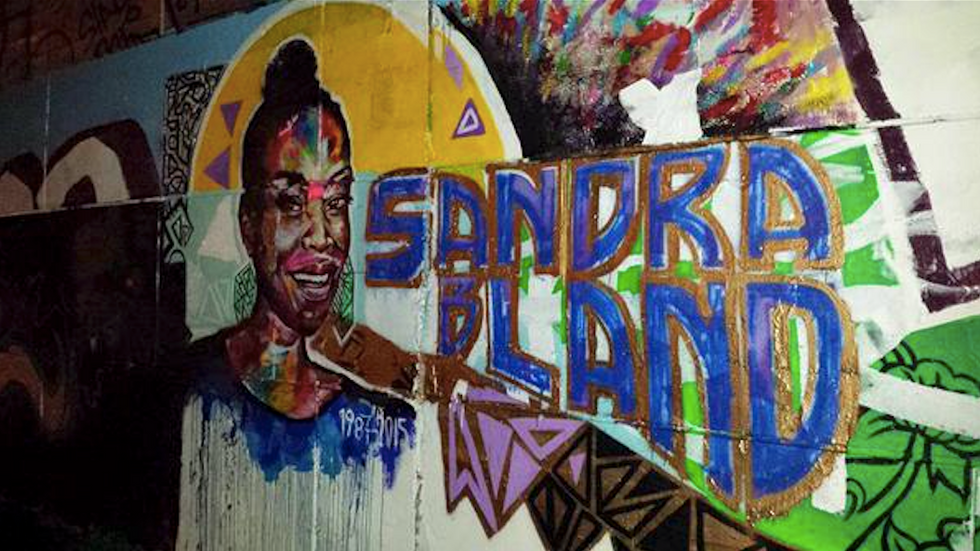 Vandals spray-painted the phrase "All lives matter" across a mural of Sandra Bland in Ottawa, Ontario on Monday night, a gesture of disrespect toward the #BlackLivesMatter movement. Activists have since restored the artwork.

According to Colorlines.com, a #BlackLivesMatter mural was created by the rights group BlakCollectiv for TechWall, an area designated for graffiti and street art. It was completed by a group of 40 people including artists Allan André and Kalkidan Assefa on the morning of July 22.

The fact that the TechWall mural read #BlackLivesMatter reportedly angered white graffiti artists, who converged on the area and within hours had defaced the mural. By the end of the day, it had been completely painted over and replaced by the phrase "Wu-Tang is for the children," a reference to 90s hip-hop collective the Wu-Tang Clan.

In response, André and Assefa painted the Sandra Bland mural, which was defaced on Monday night.

The phrase "All lives matter" has become a glib way for whites and others to dismiss the #BlackLivesMatter movement by discounting the struggles of blacks in American society. It is an attempt to negate the real impact that racism has had on the lives of black people.

By 3 a.m. on Tuesday, artists had repaired the vandalized mural.

Sandra Bland was pulled over for an improper lane change in Waller County, Texas on July 10. On Monday, July 13, she was found dead in her cell. Waller County officials claim that Bland hanged herself from a shower partition using a plastic trash can liner. Many activists and other Americans are dubious of the Texas police department's claims.