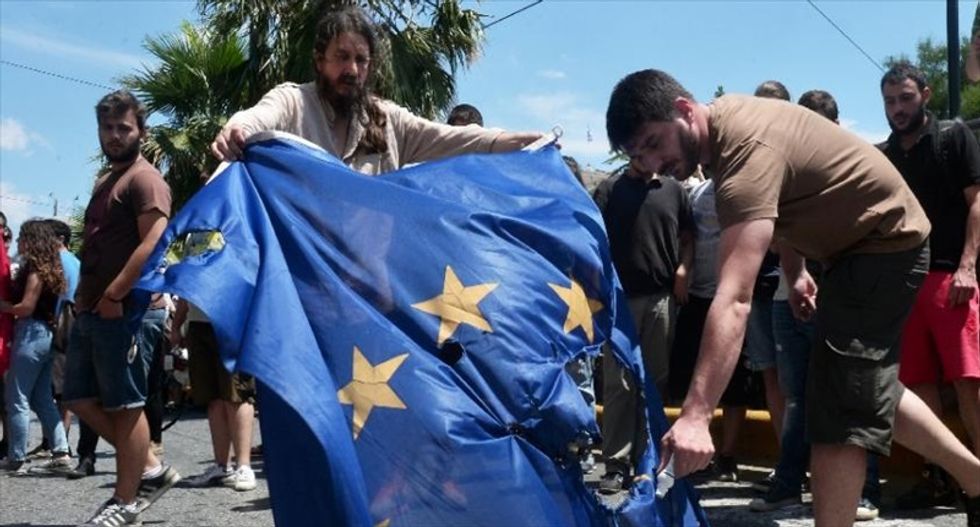 Leftist protesters try to burn a European Union flag in front of the European Commission offices in Athens on July 2, 2015. Photo by Louisa Gouliamaki for Agence France-Presse.

In the shade of oak trees in a dusty Athens park, a fierce debate is raging. Is it better to vote 'No' in the upcoming referendum and unshackle Greece from its creditors, or say 'Yes' to Europe?

Orange posters urging a 'No' vote line the streets, the word 'OXI' (no in Greek) stamped in large black letters, and towards evening groups of youngsters target the city's bars and clubs with flyers urging people to defy the creditors.

But since the government enforced capital controls this week -- closing banks to stop panicked Greeks emptying their accounts after talks with the creditors collapsed -- anger has been growing.

Five years of austerity has bled the country dry, but it is Tsipras and his radical left Syriza party that are blamed for inflicting this latest pain on exhausted Greeks, and some potential 'No' voters are now sliding over to 'Yes'.

"I was going to vote 'No' because I think the Greek people are being treated with contempt. But Tsipras has made the situation so much worse, it's his fault the banks are closed," said shop assistant Suzanna Alizoti.

The controls mean ordinary Greeks can withdraw just 60 euros ($67) a day. With many cashpoints running out of money, people queueing for hours at a time can come away empty-handed.

"I have worked hard, saved hard, and I support my parents with my savings. And now I can't even access my money? We need new jobs, new investments, not more chaos," 32-year- old Alizoti fretted.

Confusion also reigns over what the referendum is about -- or whether there is any point to it at all.

Many people agree with EU leaders, who say it is a vote on whether Greece wants to remain in the euro.

But the government says the plebiscite simply asks Greeks if they want to accept tough austerity conditions demanded by the international creditors.

As the conditions were attached to a bailout that expired on Tuesday, however, many people were questioning the validity of such a vote -- with one man polled accusing Tsipras of "stupidity, utter madness".

Shopper Danai Hanas, 25, said the wording of the question on the ballot was unnecessarily complicated and he thought it "unlikely that old people in remote villages will be able to understand it."

Lawyer Georgiadis Aris, who has several friends who have swapped from 'No' to 'Yes' in a bid to get rid of "an increasingly erratic Tsipras", agreed. "It's a totally stupid question to be asking Greeks."

While he believes the 'Yes' camp will win, "if it's only a marginal victory we'll have difficult days ahead".

"Now it's only the banks. But if there's a run on supermarkets, and fuel starts running out, it could lead to riots, to chaos, even to a coup by the sort of military junta which seized the country in 1967," he said.

With only three days to go before the referendum, Greek Finance Minister Yanis Varoufakis has said the government is "on a war footing" to ensure ballot papers reach even the farthest-flung islands in time.

As he selected the sweetest-looking apricots and cherries from a fruit vendor's wooden cart, civil servant Petros Eliopoulos said he'd been keeping an eye on the bookies, who believe a 'Yes' vote is more likely.

Polls conducted since the banking restrictions were imposed on Monday revealed a sharp slump in would-be 'No' voters from 57 percent to 46 percent.

But Eliopoulos said he was "worried the controls could also help the 'No' camp, as desperation increases".

Among the Frappuccino-sipping locals in Athens's upmarket Kolonaki district, 'Yes' is firmly in the lead.

But in heavily-graffitied Exarcheia, students sharing a cold pack of beer in the midday sun look at a shabbily-dressed group of elderly people on a nearby bench, and vow to change Greece's fate with a 'No'.

"All the creditors care about is getting the money back, they are suffocating us," said Elizabeth Markos, a philosophy student with red hennaed hair and cut-off jeans.

"If we don't free ourselves, it will be the pensioners, the poor, the students who pay, and there will be no future for Greece."