Asia markets sink after Greece votes 'No' to austerity 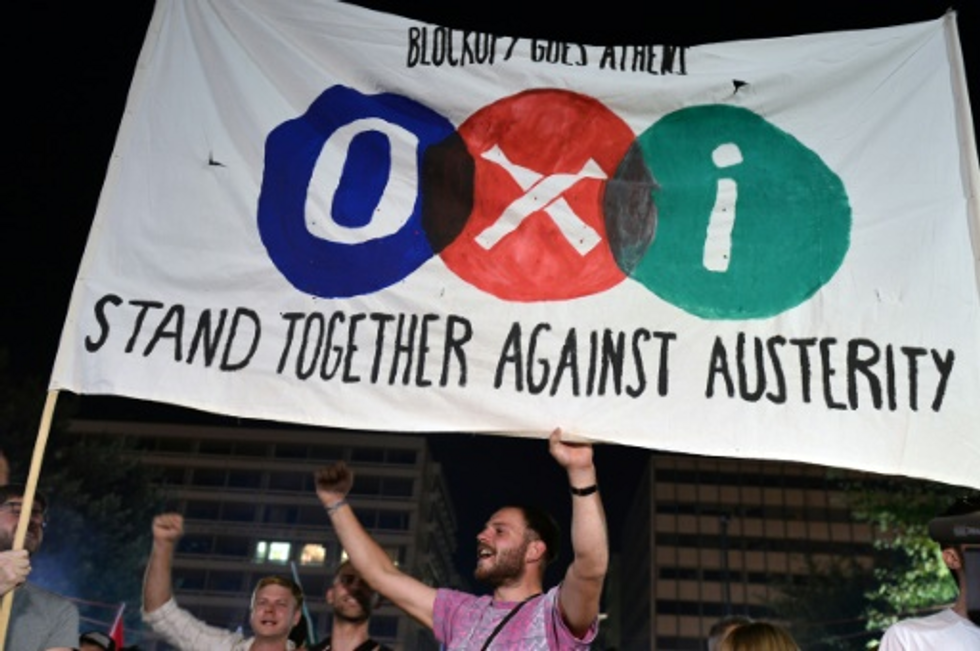 Asian stocks fell Monday after Greek voters rejected more austerity demands from creditors, fuelling fears the country will crash out of the eurozone, but the euro recovered from initial losses as dealers wait for European leaders' next move.

Despite warnings from European leaders that Sunday's referendum was effectively an in-out poll on the euro, more than 60 percent of the voters heeded the government's call to vote "No".

Shinya Harui, currency analyst at Nomura Securities in Tokyo, said the common currency was holding up as traders "assess the spill-over risks in the case of a Greek exit from the eurozone".

"It's surprising that the 'No' vote won so convincingly, certainly more decisively than the polls had suggested. This puts us in limbo for so much longer and it's very negative for risk sentiment."

The government of Greek Prime Minister Alexis Tsipras had campaigned against accepting debt reform proposals from its creditors -- the ECB, the European Commission and the International Monetary Fund (IMF) -- claiming a "No" vote would strengthen his hand in negotiations.

But Jeroen Dijsselbloem, leader of the Eurogroup of eurozone finance ministers, who had warned ahead of the poll that a "No" vote would likely lead to Greece exiting the single currency, termed the result "very regrettable".

And German Vice chancellor Sigmar Gabriel took an even dimmer view, saying Tsipras had "torn down the last bridges which Europe and Greece could have crossed to find a compromise".

He added that despite Tsipras' assertions, a fresh round of bailout talks now were "difficult to imagine".

Analysts warned the decision had likely put Athens on course to exit the eurozone.

Nomura's Harui said: "I personally think the chance (of the Greek exit) is very high, at around 70-80 percent.

"A Greek exit would shake confidence in what had been 19-nation solidarity, which could fuel anti-euro movements within Europe."