At least 14 hospitalized after deck collapses in North Carolina 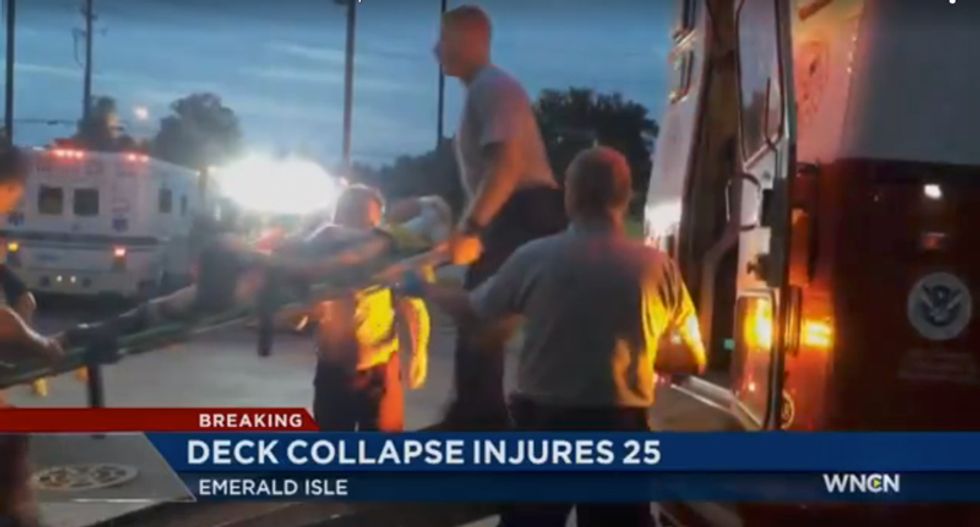 A deck on a house on the North Carolina coast collapsed on Saturday as a family gathered for a photo, and at least 14 people were rushed to the hospital including several in critical condition, officials said.

The wooden deck at the house overlooking the ocean in Emerald Isle was one-story high, officials said.

The injured were transported to hospitals from the scene, which is about 60 miles (96 km) northeast of Wilmington, police said. Three or four people were in critical condition, said Emerald Isle fire chief Bill Walker.

Walker said others with lesser injuries might not have been brought to hospitals. No details were available on the injured.

Authorities said a family had gathered on the deck to be photographed when it gave way. The cause of the collapse is under investigation, police said.

A nurse at Carteret General Hospital said the facility received 18 patients from the collapse and transferred two patients in critical condition to other hospitals.

One patient in critical condition was airlifted from the scene to New Hanover Regional Medical Center in Wilmington, southwest of Emerald Isle, said a nurse in charge at that facility.

Emerald Isle, a town of about 3,700 residents on the central North Carolina coast near the Croatan National Forest, is known as a vacation destination.

Watch a video report on the incident below:

Historian Jon Meacham is great at explaining how modern events fit into the big picture and how events of the past offer insights on the present, and he did exactly that when — during an April 16 appearance on MSNBC's "Morning Joe" — he weighed in on Derek Chauvin's trial and far-right evangelical Pat Robertson's response to it.

Chauvin is the Minneapolis police officer who has faced murder charges because of his role in the death of George Floyd on May 25, 2020. The defense rested its case in Chauvin's trial on April 15, and Robertson — the long-time host of "The 700 Club" and founder of the Christian Broadcasting Network — shocked viewers by being highly critical of Chauvin and citing him as a glaring example of someone who never should have been in police work. Robertson is a very divisive figure who is disliked by many liberals and progressives as well as right-wing libertarians, but his comments on Chauvin have been applauded by some of his most vehement critics.