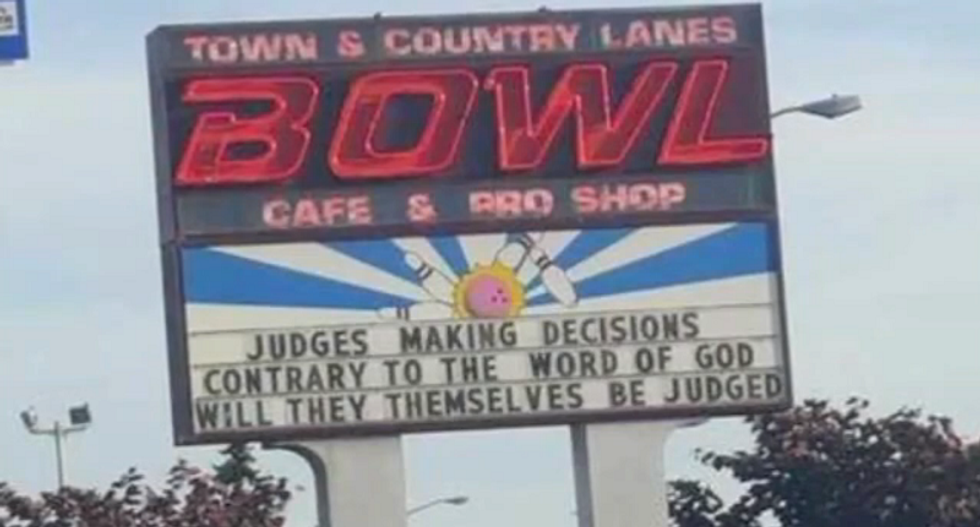 Sign outside Town and Country Lanes in Keizer, Oregon (Screenshot/KATU)

A bowling alley owner's decision to air his opinion about the landmark Supreme Court marriage equality ruling drew fire from offended members of the community recently.

The sign outside Town and Country Lanes in Keizer, Oregon, read, "Judges making decisions contrary to the word of God will they themselves be judged," reports local station KATU. But by the time the news station's reporter arrived at the scene Wednesday, the sign had been changed.

It seemed to be a play on the Gospel verse that teaches "judge not lest you be judged."

People outraged by the sign went to Town and Country's Facebook review page to put in their own two cents.

"For such bible thumpers, I find it strange that they have poker machines in the facility," wrote Amanda Baker. "Oh no wait, that brings 'them' profit so who cares right. No, I care because the crack heads who spend their money are addicts and thieves and just not very 'Godly'. I guess in today's society, you get to pick and choose what 'sins' are ok or not."

"Thanks for posting your support of inequality," wrote Sam Novak. "Saves you the trouble and expense of buying a white hood."

Glenda Beckintard chimed in with, "I hope their business tanks because they think they should play the role of God, which I doubt he appreciates!"

"Come for the dirty bathrooms and depressing ambiance. Stay for the bigotry and to stand with the owner on the wrong side of history," Andrew Smith added.

"A shitty bowling alley full of sanctimonious charlatans living in a very small bowling bubble. A side of Jesus comes with the nachos," Curt Struebin wrote.

An employee wrote on the review page that it's the staff taking the heat for the owner's sign choice.

"We've been cussed at since we've walked in this is so wrong!!!," she wrote. Later, she added, "Look this is exactly what I was talking about. Every employee is dealing with backlash. That owner doesn't stand [a]t the counter how unfair to his employees."

KATU reports the sign was changed Wednesday morning, but the message had been up for five days. Even employees of the bowling alley objected to it. A since-deleted Facebook post that appears to have been written by a supervisor told customers they were not responsible for it.

"My staff has worked hard and diligently to serve the needs of our community," the post read. "We ask you to extend forgiveness to our business because this is the livelihood of 26 employees and their families."

It then directed complaints to the alley's owner, Don Lebold.

Lebold told KATU he wasn't trying to offend anyone, but he's not a "sugar coater."

Residents who spoke to KATU said Lebold should think before he posts signs.

"Maybe just think about the fact that there could be families coming in here that have two moms or that have two dads," the man said.

Watch the report from KATU below: