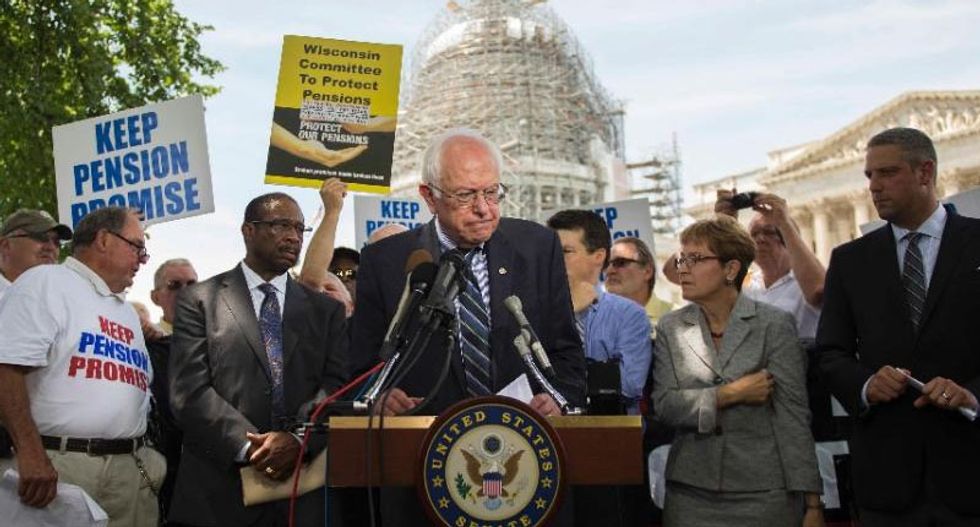 Bernie Sanders has more than halved the gap with Hillary Clinton in the early-voting state of Iowa, according to a new poll which shows the leftwing insurgent building on his recent record-breaking public appearances with growing support among key Democratic voters.

An estimated 10,000 supporters filled an arena in Madison , Wisconsin, on Wednesday night to hear the Vermont senator call for “revolution” in American politics as he challenges Clinton for the party’s nomination in the 2016 presidential election.

Sanders told the crowd: “Tonight we have made a little bit of history. Tonight we have more people at any meeting for a candidate of president of the United States than any other candidate.”

Though still seen as a long-shot candidate when compared with the former secretary of state and establishment favourite Clinton, the momentum behind Sanders’ uncompromising progressive message is also beginning to show in opinion polling.

The latest survey in Iowa , carried out by Quinnipiac University, shows him trailing her by 33 to 52 percentage points among likely Democratic participants in the state caucuses on 1 February.

This compares with Clinton’s 60-15 point lead, more than twice as large, in the last Quinnipiac poll on 7 May and the latest CNN poll from the other key early-voting state of New Hampshire showing Clinton only eight points ahead of Sanders.

Another poll released by CNN on Wednesday shows Clinton still 41 points ahead of Sanders across the country, and ahead nearly 50 points according to a rolling average calculated by Real Clear Politics .

But Sanders’ supporters are hoping that a strong showing in Iowa, and possibly even a narrow victory over Clinton in New Hampshire, would give their campaign crucial early momentum once primary voting gets under way in full next year.

“Secretary Hillary Clinton should not be biting her fingernails over her situation in the Iowa caucus, but her lead is slipping and Senator Bernie Sanders is making progress against her,” said Peter Brown, assistant director of the Quinnipiac University Poll.

“Her 52% score among likely caucus-goers is still OK, but this is the first time she has been below 60% in [our] Iowa survey,” he added.

Iowa was the scene of a humiliating defeat for Clinton in 2008 when she came third behind Barack Obama and John Edwards – a setback from which she never recovered during that primary race.

Her team has been pouring efforts into the state this time around with a series of early visits that began as soon as she declared her intention to run again in 2016.

The former secretary of state and New York senator has also been running a more openly progressive campaign than before, something many believe is designed to deter a more serious challenge from other leftwingers such as Senator Elizabeth Warren.

But Democrats in the largely Republican-dominated state of Iowa are notoriously unpredictable and appear to be warming to the full-throated anti-establishment message of Sanders.

“[He] has more than doubled his showing and at 33% he certainly can’t be ignored, especially with seven months until the actual voting,” said Quinnipiac’s Brown.

“Iowa Democratic caucus-goers are generally considered more liberal than primary voters in most other states, a demographic that helps his insurgency against Secretary Clinton who is the choice of virtually the entire Democratic establishment.”

Seasoned party operatives remain relaxed despite the big crowds and growing media attention for Sanders, comparing him with other short-lived populists such as Howard Dean rather than the more successful Obama campaign.

Sanders also cautioned against paying too much attention to the horse race during his Wednesday’s speech at the Veterans Memorial Coliseum in Madison.

A key component of Sanders’s strategy is to build popular support across the country rather than focusing on bigger donors and a handful of early primary states, as many candidates traditionally have.

“It is about putting together a grassroots movement of millions of people who stand together and make it clear that we want a fundamental change in the politics of this country so that government works for all of us and not a handful of wealthy campaign contributors,” said Sanders, who appeared in Rochester, Minnesota, on Thursday.

“That is what this campaign is about: creating a political revolution in America.”