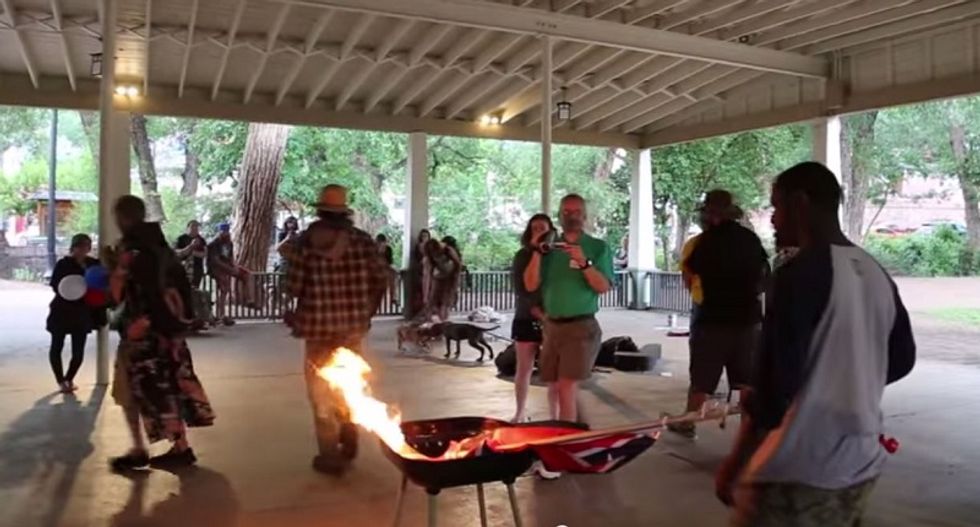 A Colorado woman is facing arson charges after she lit a Confederate flag on fire during a July 4 ceremony, according to the Colorado Springs Gazette.

Activist Patricia Cameron, 32, planned the event, #BurnTheConfederate, at Soda Springs Park. Video from the event shows activists burning a Confederate flag in a barbecue under an outdoor structure while someone plays Native American flute music nearby.

"This symbol, to me, represents hatred, division and racism," Cameron told the Gazette in an earlier interview. "This is about having a dialogue - if you don't get people to talk about racism, it will never go away."

Cameron had told the Colorado Springs Independent that the event would be peaceful.

"We don't advocate for violence at all — we're all about peaceful protest and engaging dialogue," she told the Independent. "But the point is protest is a right and not a privilege, and when you start dictating how you do so it becomes a privilege. And I don't believe in the Bill of Privileges, it's the Bill of Rights."

She said the protest was meant to engage youth in her community.

"[I]t's simply us getting together and reiterating the fact that black lives in fact matter. And we're calling for unity, and the struggle here is the Confederate flag not being one of unity — obviously," she said. "If this is one nation, there's not going to be multiple flags, especially one that has a racist quote-unquote heritage — so we want to unite under one flag."

Cameron was taken into custody briefly on Wednesday and cited on misdemeanor arson charges, but declined to comment to the Gazette. Police said she was arrested because of the danger the fire from the flag posed to the structure and people nearby.

"An accelerant was poured onto the flag, which was held over a small grill, lit with a lighter, at which point flames erupted," according to a press release from the police department. "The situation posed a risk of danger to the property and citizens of Manitou Springs, as there were multiple people in the area."

In the video, a man can be seen holding the flag on the grill and another man lights it on fire. Cameron never appears to touch it. Someone in the background can be heard saying, "Calling 9-1-1." A police spokeswoman told the Gazette that grilling or barbecuing is not allowed under the structure, known as the Soda Springs Park Pavilion.

It's unclear whether the other two men will be charged but the Gazette reports one has been identified by police and they are working to identify the other.

Watch video of the protest via Steve Carlin's YouTube below: