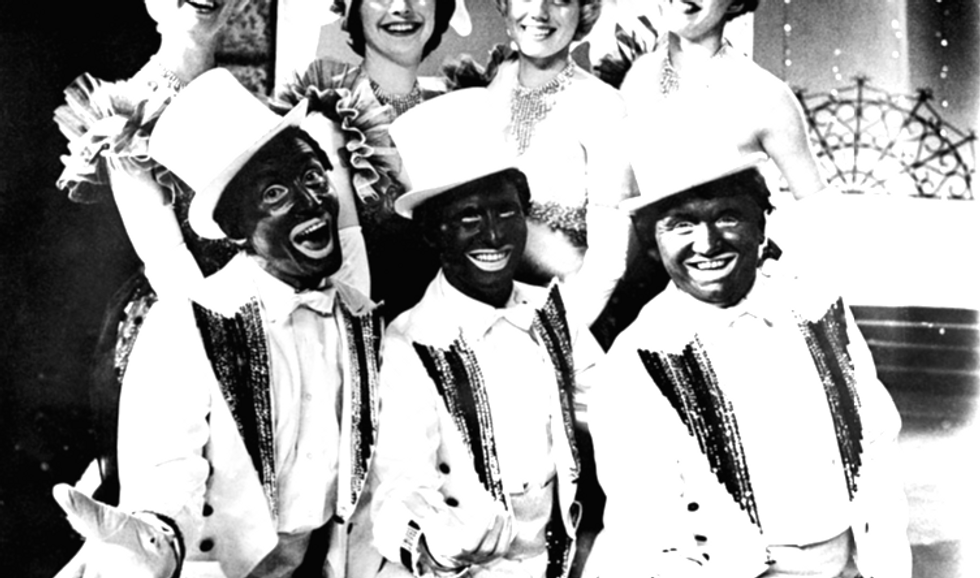 A fundraising event for the six police officers charged in the death of Freddie Gray will feature a blackface performance by a 77-year-old former cop.

Ebony magazine Senior Editor Jamilah Lemieux reported on Wednesday that the Nov. 1 affair features dinner and a long list of entertainers, including one "Bobby 'Al Jolson' Berger -- out of retirement."

Lemieux researched Berger and found that he is a retired ex-cop who has been performing in blackface as early 20th century minstrel singer Al Jolson -- a white man who performed black American music with his hair and skin styled in an exaggerated parody of a black man's features -- for decades.

She contacted Berger, whose off-duty performances got him canned from the Baltimore Police Department in 1984. Berger's refusal to stop the minstrel shows created tension with the police force and the two parties reportedly fought over the firing in court for a decade, settling out of court in Berger's favor in 1991.

Lemieux wrote that one can hardly imagine a less appropriate, more insulting way to raise funds for officers implicated in the racially-charged killing of an unarmed black man.

"Did the organizers think they could keep this event hidden from the public?" she said. "Or do they simply not care about the optics?"

When she spoke with Berger, he denied that there is any racial element to his performances.

"There really isn’t. I know it sounds crazy,” said Berger.

“I was on Montell Williams in Blackface and he said on national TV that there was nothing racist about it. Ben Vereen commented on the show, he was fine with it,” he insisted. “The only time I had a problem was when the NAACP came and picketed me."

Members of the Baltimore chapter of the NAACP reportedly sat Berger down and tried to explain to him why blackface performance is considered offensive and degrading to black Americans.

“They took out a book and showed me pictures of buffoon-type characters. We talked for 10 minutes, and they told me if they could name 3 Al Jolson songs, I would never do the show again. They named 'Mammy' and 'Swanee' and that was it," he said. “They didn't know what they were talking about.”

Even though his passion for minstrelsy cost him his career in law enforcement, Berger said he is unrepentant.

“If you are English and portraying Othello, you gotta Blacken up. If you are going to play Liberace, you better have on a jacket that looks like it costs 100 thousand dollars. There is one person in the Smithsonian as the greatest entertainer in the world: Al Jolson,” he told Lemieux. “I try to think of a Jolson song that is offensive with the lyrics and I can’t. I’ve been singing him since I was a little kid. My homework revealed that he was anything but a racist."

"There is not a prejudiced bone in my body," Berger said.

Of the performances, he said, “It’s just make-up. There’s no jokes, there’s no buffoonery. If that bothers you, don’t buy a ticket.”

Watch an early 1980s news story about Berger, embedded below: