#BlackLivesMatter co-founder warns presidential candidates: 'We will shut down every single debate' 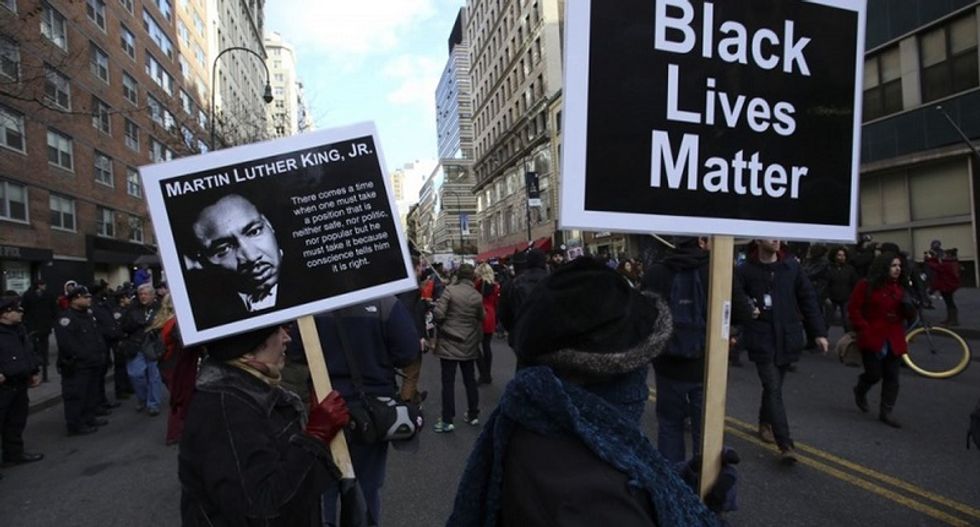 "He couldn't take 15 more minutes of the heat," Cullors said of Sanders in an interview on This Week in Blackness, making reference to the senator ending his appearance as demonstrators at the event walked out en masse.

Journalist and activist Jose Antonio Vargas, who interviewed both Democratic candidates during the forum, later told The Raw Story that he was directed to wrap up his discussion with Sanders 15 minutes ahead of schedule.

Cullors told This Week host L. Joy Williams that she felt neither O'Malley nor Sanders were "humble enough" during their town hall appearance, and called on presidential candidates to be willing to openly discuss issues of race and gender.

"No more skirting around the issues," Cullor said. "We will shut down every single debate."

The protest began during O'Malley's interview with Vargas, with demonstrators jeering when O'Malley used the phrases "every life matters" and "white lives matter" while responding to a question calling on him to demonstrate an "action plan" for how he would address police violence if elected.

The response interrupted the former governor after he said he would push for police to be required to report every officer-involved shooting. Later, he told Raw Story that he would also ramp up use of body cameras by officers, and would also ensure that departments be more inclusive of communities of color in their recruiting processes.

"I think these are all things that our federal government can help us lead and also encourage," he said following a meeting with immigration activists later in the day. "Perhaps even providing a framework for police departments to cross-designate prosecutors from other jurisdictions when a judgment call needs to be made on a police-involved shooting."

The protest continued during Sanders' appearance, with one woman standing on a chair and using the #IfIDieInPoliceCustody tag, which has spread in the wake of the deaths of Kindra Chapman and Sandra Bland.

"If I die in police custody, I want Bernie Sanders to say my name," she said, as seen in the picture below:

Cullors and other protesters also called on the senator to "deal with anti-blackness" instead of focusing his speech on economic measures.

"Black lives of course matter," Sanders said at one point. "But I have spent 50 yrs of my life fighting for civil rights and if you don't want me to be here, that's OK."

But following the event, Cullors said Sanders and other presidential hopefuls need to make black communities feel like they are not being "sold something."

"If you want our vote, you are going to have to do way more work," she said.