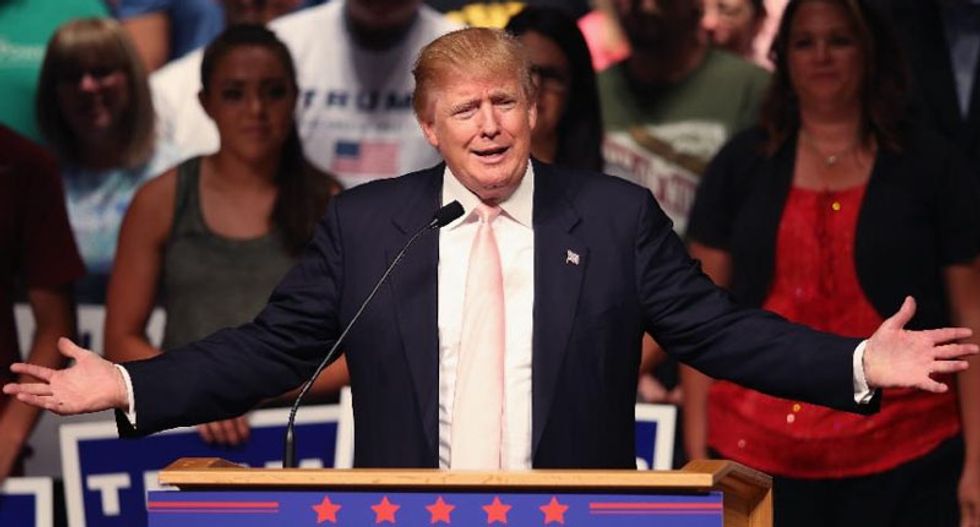 Bombastic US billionaire Donald Trump handily leads all fellow Republicans in the 2016 presidential race, though Hillary Clinton and other Democrats trump him in head-to-head matchups, a poll said Thursday.

Trump plunged into the crowded Republican nomination battle last month, and has since uttered insults about Mexican immigrants and caustic jabs at rivals that has kept campaign media attention focused squarely on the trash-talking real estate mogul.

He now leads the 17-candidate Republican field with 20 percent support, followed by conservative Wisconsin Governor Scott Walker with 13 percent and former Florida governor Jeb Bush, the son and brother of two presidents, with 10 percent, according to a national survey by Quinnipiac University.

Trump's negatives are sky-high, however. He led the "no way" list, with 30 percent of Republicans saying they definitely would not support him.

"They love him and they hate him," said Quinnipiac University Poll assistant director Tim Malloy.

"Donald Trump triumphs on the stump so far, but do voters really want him? Maybe not so much."

Ex-secretary of state Clinton leads rival Democrats overwhelmingly with 55 percent support among Democratic voters, according to the poll.

Independent Senator Bernie Sanders is second with 17 percent, while Vice President Joe Biden, who is not officially a candidate, earns 13 percent.

All three lead Trump in hypothetical matchups, with Clinton the furthest ahead at 48-36 percent, according to Quinnipiac.

Clinton matchups against other Republicans are too close to call. She nips Walker 44-43, but trails Bush 41-42, poll results showed.

Trump has made a big splash in two closely-watched states that vote early in the party primary process: New Hampshire and Iowa.

An NBC/Marist poll released Sunday had Trump with a seven-point lead in New Hampshire and two points behind the leader in Iowa.

A CNN/ORC poll put Trump at the front of the Republican pack with 18 percent, and Bush in second with 15 percent.

Trump roiled the presidential race and sent the Republican establishment into convulsions last month when he described some Mexican immigrants as criminals and "rapists."

He then belittled former Vietnam prisoner of war John McCain, reasoning that the senator and 2008 Republican nominee was not a war hero because he had been captured.

Several Republican Party leaders have spoken out against Trump and his comments, but many ordinary voters frustrated with Washington have expressed appreciation for his blunt talk.