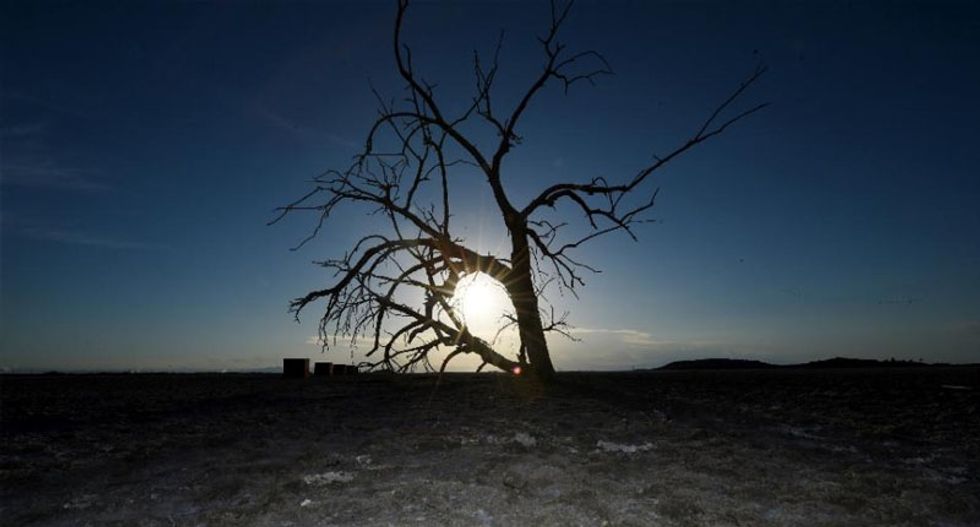 An efficient solution to a historic drought, or an environmentally risky pact with the devil?

That's the question raised by California farmers who are irrigating their crops with waste water supplied by oil companies, in an arrangement slammed as dangerous by environmental campaigners.

Driving into the parched region around Bakersfield, in the western US state's fertile Central Valley, it is evident how closely the agriculture and oil industries are related.

Lines of orchards stand near fields of oil wells stretched out as far as the eye can see.

Eighty percent of the state's oil production and 45 percent of the farming industry is concentrated in a single county, Kern County, said Madeline Stano of the Center on Race, Poverty and the Environment.

With temperatures frequently exceeding 40 Celsius (104 Fahrenheit) in the summer, water is in scarce supply.

After four years of record drought, farmers can no longer pump water from rivers whose levels are dangerously low.

Drawing from the water table is also increasingly difficult: more than 1,000 wells have dried up in the region.

In a bid to diversify supplies, the Cawelo Water District, a cooperative financed by local farmers, has for 20 years used waste water from oil companies.

Abby Auffant, spokeswoman for oil giant Chevron, explained that crude comes out of the ground mixed with water, from which it must be separated.

Separating the water from the crude is a process that actually benefits oil firms, according to Stano.

"It's hard for the oil industry to get rid of, so it's a win-win for the oil companies" when they are able to sell the water, she said.

Chevron's Kern River operation sells some 500,000 barrels of waste water per day to the Cawelo Water District, which currently gets 50 percent of its supplies from the oil company.

The water is cleaned by a filtering system and piped to a reservoir where it is combined with supplies from other neighboring oil plants, before being mixed with fresh water and then distributed to some 90 local farms and vineyards.

The farmers pay about $33 per acre-foot (1,233 cubic meters), compared to up to $1,500 for the same quantity of fresh water, said David Ansolabehere, head of the water distribution cooperative.

The practice is entirely legal: Chevron and rivals including Occidental Petroleum Corporation have a permit to sell the water. They have it tested by a third-party firm and then supply the results to California authorities.

"We're in compliance with all the testing requirements," said Auffant.

"There's a petrochemical content in our... permit and we have always met and been under it."

But environmental campaigners don't see it the same way.

"It's an experiment that the state of California and the oil industry performs without consumer consent," Stano said.

"In Chevron's own report we found benzine and acetone, which are carcinogenics" in the water sold to farmers, she said, claiming that the tests also fail to detect other dangerous chemicals.

"There has been a gentleman's agreement to promote deregulation," she added.

Stano denounced a "lack of state enforcement and oversight (and) blind faith in the industries for a long time."

"Chevron should be interested in partnering with more than just their complicit customer (Cawelo Water District) to protect health, community, environment and water resources," he said.

Almonds, grapes and other agricultural produce are not evaluated apart from their pesticide content, Ansolabehere admitted.

He noted that Californian authorities have decided to form a working group that could order tests on farm produce, after a Chevron report showed salinity which Ansolabehere admitted "was a bit high."

The group would also verify that chemicals like acetone or benzene "cannot get into the roots, the leaves and the fruit," he added.

Tom Frantz, a former and environmental activist, said the stakes are high.

"People would stop buying anything from Kern County for a while if someone got sick," he said.