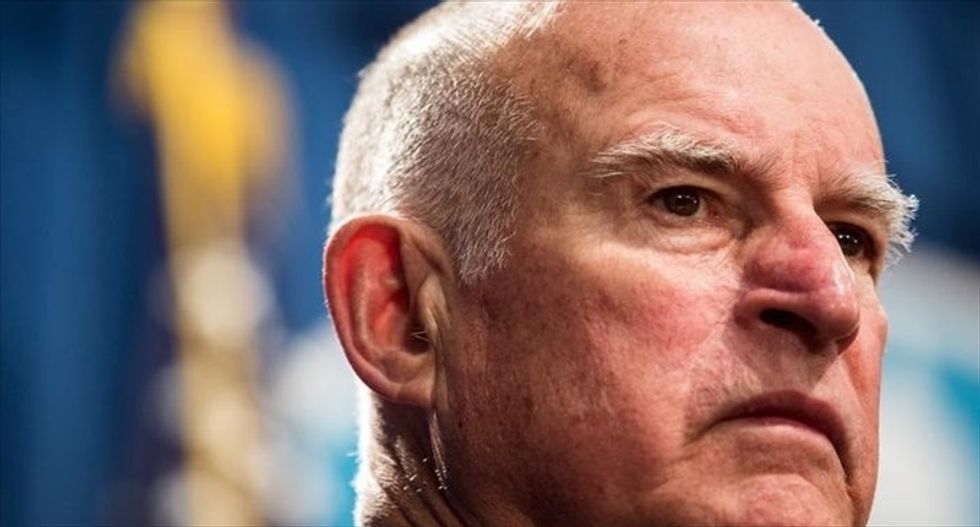 California Governor Jerry Brown looks on during a news conference at the State Capitol in Sacramento, California on March 19, 2015, to announce a $1 billion emergency legislative package to deal with the state's devastating, multiyear drought. Photo by Max Whittaker for Reuters.

California Governor Jerry Brown on Thursday signed a bill striking the word "lynching" from a 1933 law that used the term to describe the crime of trying to take someone from police custody.

The bill, which passed unanimously in the state legislature last week, followed outrage over the arrest of African-American activist Maile Hampton on a charge of felony lynching during a "Black Lives Matter" demonstration in Sacramento in January.

The bill keeps the same punishment for the crime while only removing the term "lynching." It was one of several bills Brown signed on Thursday, his office said.

Hampton's attorney, lawmakers and other supporters rallied behind her at court and on social media, saying it was ironic that she had been charged under a decades-old law originally enacted to protect black detainees from white lynch mobs.

Her supporters also called for the removal of the word lynching from the penal code, saying its application was not appropriate.

Thousands of African-Americans were victims of lynchings, or extrajudicial public execution by hanging, in Southern states in the 19th and 20th centuries.

"It's been said that strong words should be reserved for strong concepts," Senator Holly Mitchell, a Democrat who authored the bill and represents a district including historically African-American communities in Los Angeles, said in a statement.

"And 'lynching' has such a painful history for African Americans that the law should only use it for what it is – murder by mob," she added.

Hampton was detained for allegedly trying to pull a friend from police custody during a January protest over the killings of unarmed black men by police, the Sacramento Bee reported.

Trying to remove someone from police custody by means of a riot is a felony punishable by between two and four years behind bars.