Chris Brown begs Philippines to allow him to leave 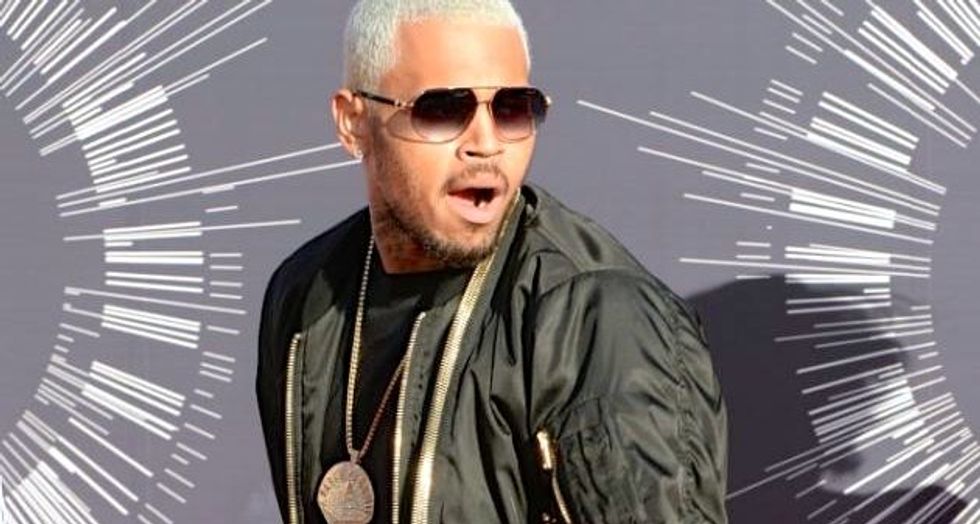 In a desperate appeal punctuated with a backflip, stranded Grammy-winning hip-hop star Chris Brown got down on his knees Friday begging to be allowed to leave the Philippines and resume his world tour.

The 26-year-old American has been stuck in the Southeast Asian nation for two days after a politically influential sect filed a fraud complaint, saying it is owed a million-dollar-plus refund after he skipped a concert last year.

"Please, please, let us leave, please," Brown said in a video posted on his official Instagram account, showing him on his knees inside what appeared to be his hotel room. The post was later taken down.

He ended the plea with his signature backflip.

He also appeared to send a thinly veiled distress signal to US President Barack Obama as he captioned the post: "OBAMA!!!!!!!!!!"

In two subsequent Twitter posts Brown said: "This is a very serious situation and someone needs to be held accountable for mixing my name up in all this. I've done nothing wrong!!!"

He added: "I have nothing to do with anything going on right now. I came back to Manila to do a make-up show for New Years. I did the show three days ago."

Brown performed to a packed crowd at a Manila arena on Tuesday.

But he failed to show up on December 31 last year for a concert sponsored by the Christian group Iglesia ni Cristo at its mammoth 55,000-seater indoor stadium on Manila's outskirts.

He has reportedly said he lost his passport at the time so he could not travel.

The justice department barred him from leaving Wednesday unless he produces a government document certifying he has no legal obligations in the country.

Brown and his promoter were paid more than $1 million by a production outfit identified with the Iglesia to perform at the sect's Philippine Arena, according to the Iglesia complaint.

The outfit demanded a refund, but both Brown and his promoter refused to pay, it alleged.

The sect is a minority in the Philippines -- where 80 percent of its 100 million people are Catholics -- but wields considerable political clout.

It has between two and three million members according to media and votes as a bloc during elections.

"He has to coordinate with the Bureau of Immigration because (it) has the authority to either grant or deny the emigration clearance certificate," Justice Secretary Leila de Lima told reporters Friday.

Immigration spokeswoman Elaine Tan told AFP Friday that Brown had not yet applied for such a document.

Brown's spokeswoman and promoter were not available for comment Friday.

He has more than 14 million followers on the micro-blogging site, and 12 million on the photo-sharing platform Instagram.

A playful, bewildered Brown posted a foul-mouthed rant on his Instagram on Thursday as he break-danced apparently to make light of his predicament.

But his tone was more serious on Friday as the upcoming stops of his world tour drew nearer.

Brown is scheduled to perform in Israel and Cyprus next week before returning to the US for more concert dates, according to his website.

Asked about Brown's case, US embassy spokesman Kurt Hoyer told AFP on Friday: "The embassy assists its citizens who are in need."

The Brown saga was the latest case of Western entertainers riling Filipino groups and politicians.

The Beatles were stripped of police escorts at the end of their 1966 Manila tour after they snubbed a party invite from the then Philippine president Ferdinand Marcos' flamboyant wife Imelda Marcos.

The Fab Four were forced to run a gauntlet of angry fans as they boarded their plane.

Michael Jackson was forced to move his concert venue in 1996 after the mayor of Manila refused to host his show due to child molestation charges against the US star.

Last March, two members of British boyband One Direction who were known to have smoked marijuana each paid a safety bond before they could perform.