CNN host corners Rick Santorum on LGBT tolerance: 'Why aren't you more like your pope?' 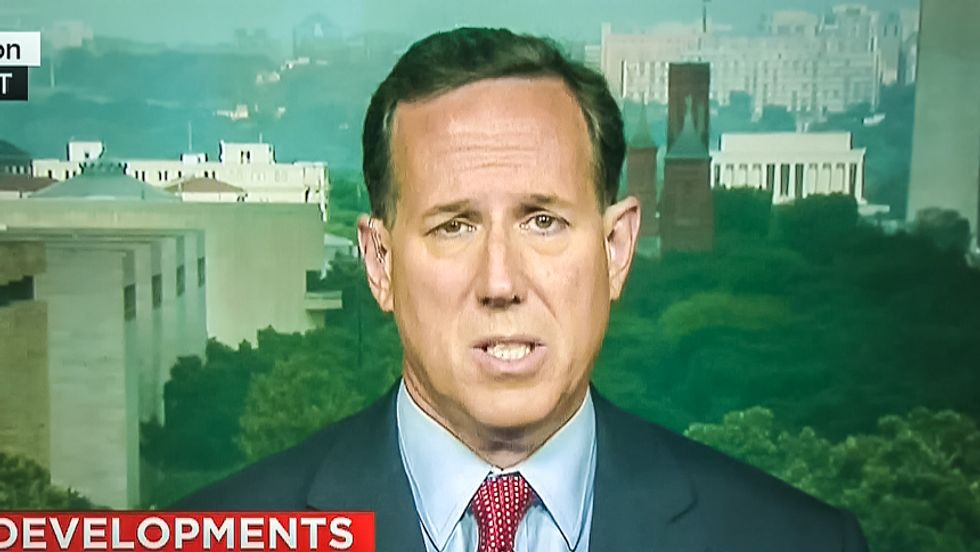 Republican presidential candidate Rick Santorum insisted on Tuesday that tolerance meant understanding that LGBT people were "sinners" who made "mistakes."

During an interview on CNN, host Chris Cuomo pointed out that the Catholic candidate's rhetoric seemed to be out of step with Pope Francis.

"Your pope says tolerance is the message of Catholicism," Cuomo explained. "When asked about gay marriage and LGBT existence within humanity, he says, who am I to judge? That doesn't work for you. You say you want an amendment that keeps marriage between a man and a woman."

"Why aren't you more like your pope?" the CNN host wondered.

"The pope doesn't support a change the definition of marriage," Santorum replied defensively. "I mean, he's been perfectly clear about that."

"He said, 'Who am I to judge?'" Cuomo reminded the candidate.

"That's not what he said," Santorum shot back. "He's been very, very, very clear about standing for the definition of marriage. I don't think there's any question about that."

"What he's talking about -- and he absolutely right -- is we need to respect the dignity of all human life," the Pennsylvania Republican continued. "We are all broken, we are all sinners, we all make mistakes. And we have to continue to love and support those who fall short of the mark, including me."

Cuomo pressed: "With all the things we are facing as a culture, why would you invest the energy into a constitutional amendment to define marriage as between a man and a woman?"

According to Santorum, strengthening the family was "the most important thing I would do as president."

"That's divorce though!" Cuomo noted. "None of the Christian resistance to gay marriage ever talks about divorce."

Santorum, however, insisted that he had expended significant energy talking and writing books about divorce.

"I see the issue of gay marriage as really a continuation of the breakdown of marriage over a long period of time," Santorum opined. "In that respect, I think we can probably agree."