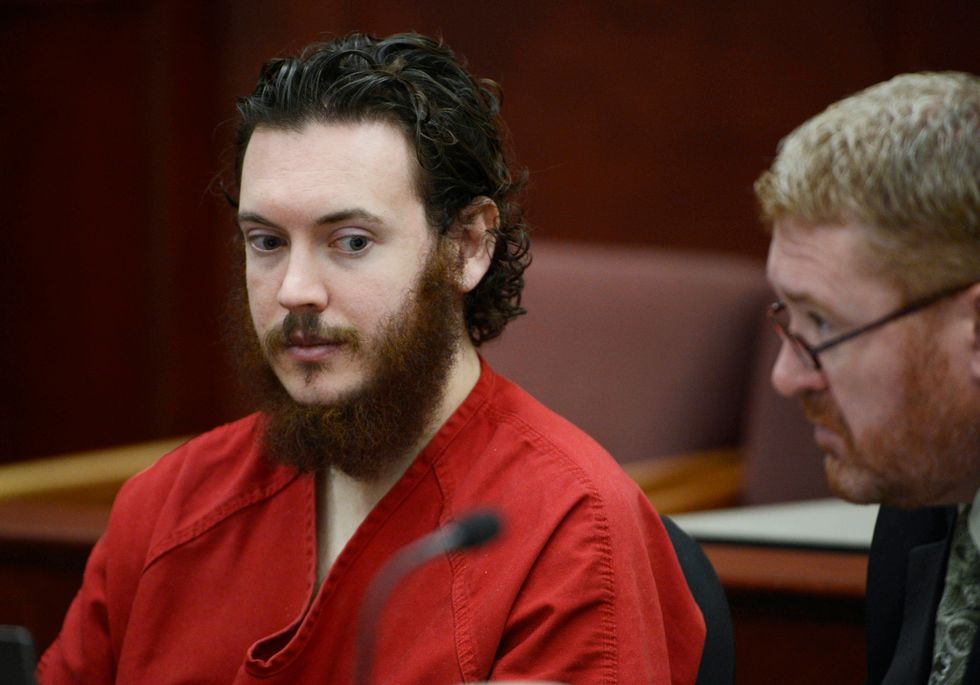 After all 165 guilty verdicts were read and Colorado's movie massacre gunman was taken back to a cell to await his fate, many of his victims smiled and hugged and said James Holmes must be executed for justice to be done.

Survivors and their loved ones gathered outside the rain-swept courthouse on Thursday evening, after Holmes was convicted of killing 12 people and wounding 70 inside a Denver-area theater. The third anniversary of the rampage will be this Monday.

"As soon as we heard the first 'guilty' we knew the other dominoes were going to fall," said Tom Sullivan, 60. His son Alex, called Sully by his friends and co-workers, had been celebrating his 27th birthday with friends at the cinema when Holmes killed him and the others in a hail of bullets.

"We're part of the way through this and ready for the next step," Sullivan, 60, told Reuters.

That next step starts on Wednesday when the trial enters the sentencing phase. Jurors will hear more weeks of testimony, then decide whether Holmes should be put to death by lethal injection or serve a life sentence with no possibility of parole.

"I hope to do everything I can to see this guy's privileges are taken away and he no longer gets to breathe the sweet air that Coloradans get to breathe," Sullivan said.

Prosecutors rarely call for the death penalty in Colorado. Currently there are three inmates on death row, and only one death-row inmate has been executed in the state in nearly 50 years.

Two years ago, Governor John Hickenlooper drew fire from some when he granted a reprieve to the state's longest-serving death row inmate, quadruple killer Nathan Dunlap. His critics included the lead prosecutor in the Holmes case, District Attorney George Brauchler.

Also outside the Arapahoe County Justice Center on Thursday was Marlene Knobbe, 79, grandmother of slain college student Micayla Medek, 23. Knobbe said she was "thrilled" with the verdict.

For Sullivan, Knobbe and others forever affected by the massacre, Thursday's unexpectedly quick verdict ended years of worrying whether a jury might buy Holmes' insanity plea.

But after hearing from hundreds of witnesses and seeing thousands of pieces of evidence during the almost three-month long capital trial, the nine women and three men on the panel returned guilty verdicts after just about a day and a half of deliberation.

Holmes, 27, remained expressionless, hands thrust into pockets throughout the hour it took for Judge Carlos Samour to read "guilty" after all 165 charges. In the packed public gallery behind the defendant, some victims celebrated quietly, embracing and clapping each other on the shoulder.

During the penalty phase, jurors will consider aggravating factors, such as the murder of a child, the youngest victim, six-year-old Veronica Moser-Sullivan.

They will also hear mitigating factors presented by Holmes' court-appointed attorneys, who could even call the gunman's parents, Arlene and Bob.

The process is expected to last until late August, when the jury will decide if Holmes should be executed for one of the worst mass shootings in recent U.S. history.

Jansen Young, a survivor who was wounded in the shooting and whose boyfriend was killed, said she would accept it if the jury gave Holmes life in prison. But she said she was pushing for the death penalty because it was what her boyfriend Jonathan Blunk, 26, would have wanted.

Also outside court, Sandy Phillips watched some of the survivors leaving, including one being pushed in a wheelchair. Her 24-year-old daughter, Jessica Ghawi, was in the theater that night and died after being hit by several of Holmes' bullets.

"We're very happy that this animal, this monster, will never see the light of day," Phillips said.

French officials are moving ahead with a delicate plan to transport a beluga whale back to the ocean after it swam far up the Seine river toward Paris, putting its life in danger, a marine expert said Tuesday.

The four-meter (13-foot) cetacean was discovered a week ago and appears sick and underweight but its condition is "satisfactory," Isabelle Brasseur of the Marineland sea animal park in southern France, Europe's biggest, told AFP.

'Get ready for raids at other locations': Mar-A-Lago search 'bodes very ill for Donald Trump'

Former President Donald Trump's legal problems are about to get a lot worse, according to MSNBC's John Heilemann.

The FBI executed a search warrant Monday at Trump's residence at Mar-A-Lago, reportedly as part of an investigation of his mishandling or theft of classified documents, and the "Morning Joe" political analyst said the former president should be prepared for additional raids.