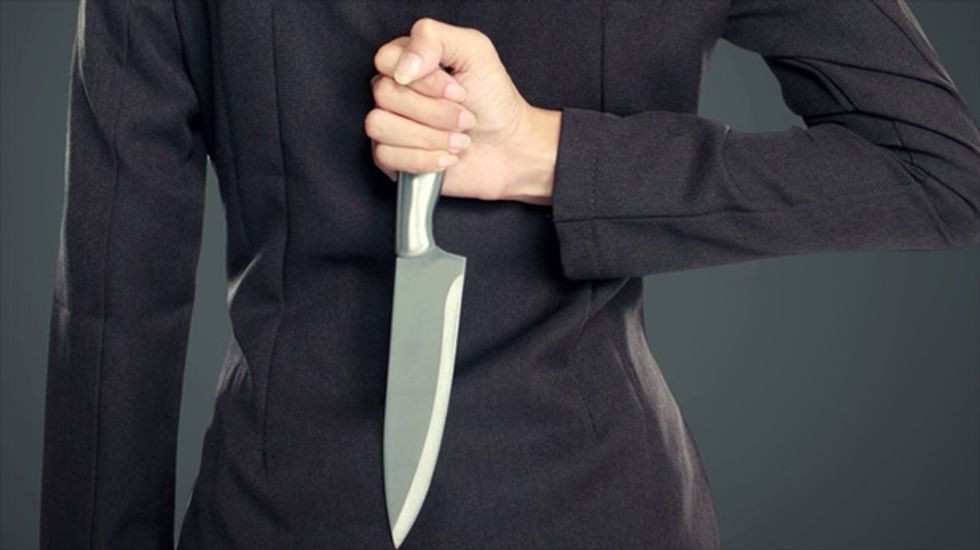 Woman Holding Knife Behind Her Back' [Shutterstock] http://tinyurl.com/nqh436d

A Colorado woman pleaded not guilty on Thursday to stabbing a pregnant stranger and cutting out her fetus after allegedly luring the victim to her home with an online ad for baby clothes, authorities said.

Dynel Catrece Lane, 34, appeared in Boulder County court charged with attempted first-degree murder, felony assault and unlawful termination of a pregnancy in connection with the attack in March.

Michelle Wilkins, who was seven-months pregnant, survived the assault in the town of Longmont, 30 miles north of Denver, but her unborn baby girl died.

Lane entered the plea of not guilty through her lawyers, said Catherine Olguin, spokeswoman for the district attorney's office in Boulder. A two-week trial was set for Feb. 16.

Prosecutors have said that Lane lured the 26-year-old Wilkins to her home under the pretext of selling maternity and baby clothing via a posting on Craigslist.

According to court documents, the two women talked for about an hour before Lane took the victim into the basement. Lane then allegedly stabbed the victim in the neck with shards of glass from a broken lava lamp, then performed a crude Cesarean section with a knife.

Police have said Lane had duped her husband into believing she was pregnant, and that when he came home on the day of the attack, Lane told him she had suffered a miscarriage. They then went with the fetus to the hospital, police said.

Lane's story unraveled after staff there became suspicious when she refused an examination, and she ultimately admitted to a detective that she had attacked Wilkins, police said.

The victim, who had been left bleeding on a bed in the basement while the couple went to the hospital, was eventually able to make a 911 call and direct rescuers to the home, despite drifting in and out of consciousness.