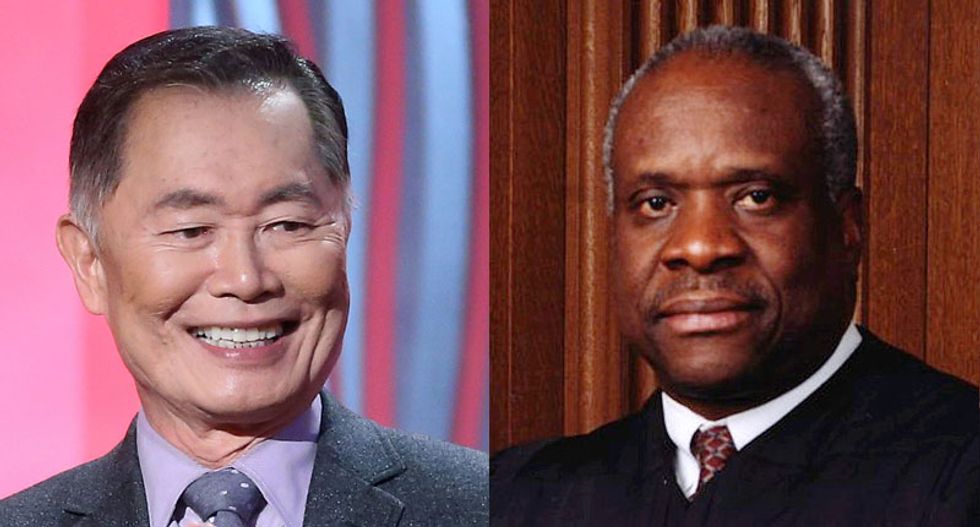 Conservatives are livid over recent comments by George Takei, claiming the former Star Trek actor and gays rights activist is racist -- with some even comparing him to a Ku Klux Klan member.

Takei defended himself from the attacks on Thursday, insisting he wasn't racist for calling Supreme Court justice Clarence Thomas "a clown in blackface." On his Facebook page, Takei wrote that "blackface" was "traditional theater lingo" that was a part of the "racist history in this country."

"I feel Justice Thomas has abdicated and abandoned his African American heritage by claiming slavery did not strip dignity from human beings. He made a similar remark about the Japanese American internment, of which I am a survivor. A sitting Justice of the Supreme Court ought to know better," he former actor added.

The conservative media watchdog NewsBusters reported Thursday that Takei had "unleashed a racist rant" against the Supreme Court justice over his dissent in the case that legalized same-sex marriage nationwide. Thomas had written that governments could not strip humans beings of their inherent dignity. "Slaves did not lose their dignity (any more than they lost their humanity) because the government allowed them to be enslaved," he wrote.

Takei blasted Thomas, who his black, for his dissent in an interview with local news outlet Fox 10 Phoenix.

"He is a clown in blackface sitting on the Supreme Court," he remarked. "He gets me that angry. He doesn't belong there. And for him to say, slaves have dignity. I mean, doesn't he know that slaves were in chains? That they were whipped on the back. If he saw the movie 12 Years a Slave, you know, they were raped. And he says they had dignity as slaves.

"My parents lost everything that they worked for, in the middle of their lives, in their 30s. His business, my father's business, our home, our freedom and we're supposed to call that dignified? Marched out of our homes at gun point. I mean, this man does not belong on the Supreme Court. He is an embarrassment. He is a disgrace to America."

In an op-ed article published by MSNBC, Takei said he disagreed with Thomas because of his own personal experience.

"I was only a child when soldiers with bayonetted rifles marched up our driveway in Los Angeles, banged on our door, and ordered us out. I remember my mothers’ tears as we gathered what little we could carry, and then were sent to live for many weeks in a single cramped horse stall at the Santa Anita racetracks," he wrote.

"Justice Thomas need have spent just one day with us in the mosquito-infested swamplands in that Arkansas heat, eating the slop served from the kitchen, to understand that it was the government’s very intent to strip us of our dignity and our humanity."

Conservative news outlets and blogs labeled Takei a racist, and slammed other websites for not covering his comments.

The conservative site RedState suggested Takei was worse the Ku Klux Klan, because at least a KKK member could pretend to not be racist.

"What is the difference between George Takei and Ku Klux Klan member? The Klan member can pretend to not be a racist while on television. George Takei is a racist. There is no other way to put it. He might as well have his valet send his white robe to the cleaners to have it pressed and starched while his gardener makes a nice, flammable cross," the website said.

A number of angry conservatives on Twitter also compared Takei to the KKK.

The Federalist wrote: "And who in their right mind, while claiming to totally not be a dirty racist, says things like, '[That black man] abdicated and abandoned his African American heritage'? Seriously, who does that? Clarence Thomas can no more 'abdicate' his heritage as an African-American than Rachel Dolezal can claim that heritage for herself."

The Right Scoop also said the former actor was "just filled with incredible hatred in his heart."

"What a puke. George Takei has shown the world that he’s one big giant jackhole with his racist rant against Clarence Thomas," the website wrote.