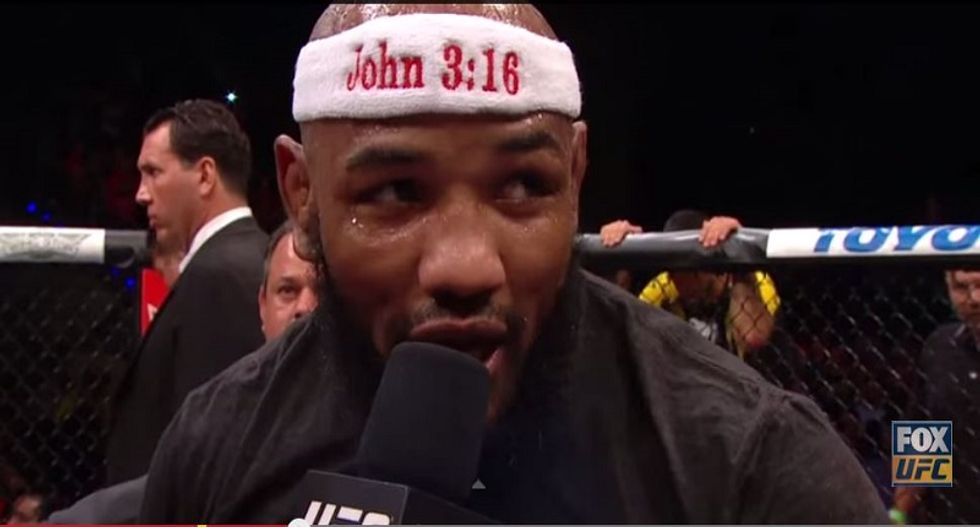 Conservatives are throwing a fit after UFC president Dana White instructed his fighters to leave comments about their faith at home following matches.

The instruction came after middleweight fighter and native Spanish speaker Yoel Romero evangelized the crowd and made what was mistaken for derogatory comments about gays after winning a match, MMA Mania reports.

Romero, who goes by the moniker "Soldier of God," wore a white headband with "John 3:16" emblazoned on it. He spoke directly to the crowd in broken English, chastising Americans for forgetting about Jesus.

The rant came after the Supreme Court's landmark marriage equality ruling and drew criticism. Because of his heavy accent, many heard him say "go for Jesus, no for gay Jesus," while others heard, "no forget Jesus."

Either way, White didn't appreciate God being dragged into the ring but ultimately helped Romero avoid more controversy. According to MMA Mania, he said:

"But the reality is this: You just won the biggest fight of your career, America doesn't want to hear your thoughts on Jesus," he said. "Keep that stuff at home; religion, politics, all that stuff. When you're out there fighting and you're being interviewed, they want to hear about the fight. It's awesome you love Jesus; love Jesus all you want. You just don't have to do it publicly."

White denied that Romero made an anti-gay comment, but again suggested that he keep his religious faith at home. "Talk about your fight, you know, people don't want to be preached at," he remarked.

This prompted blowback from conservative radio host Dana Loesch, who suggested White had proposed a new regulation for UFC fighers.

Newsflash @danawhite , some of your viewers actually DO like to hear fighters mention faith. Don't assume to know. http://t.co/Rgqf2le3TK
— Dana Loesch (@Dana Loesch)1435846463.0

Conservative website LibertyNews called White "Godless" and criticized him for sending "a very clear message for his fighters. Don’t talk about Jesus." Other Christians expressed offense and some said they would stop watching UFC altogether.

@StephenPeeTree "Love jesus all you want just don't do it publicly" @danawhite This is what America is becoming #IllDoItPublicly
— Stephen Petrie (@Stephen Petrie)1435773640.0

Watch video of Romero's speech and White's response below: