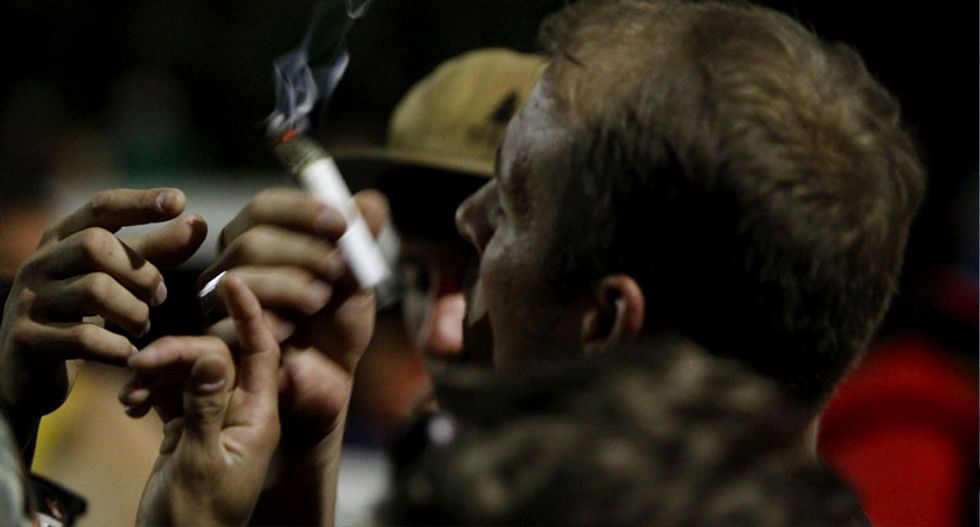 Marijuana enthusiasts gather after midnight to celebrate the legalization of recreational use of marijuana in Portland, Oregon July 1, 2015. REUTERS/Steve Dipaola

Crowds counted down the minutes to midnight then lit up joints as smoking marijuana became legal in Oregon on Wednesday, part of a growing legalization movement spreading down the United States' west coast.

Hundreds gathered on the Burnside Bridge in downtown Portland and smoked under the glow of a neon city sign, marking the moment that the law allowing recreational use, backed by voters in November, came into effect.

The legislation opens the way for shops to sell marijuana by next year - though some lawmakers say they will still try to block retail outlets.

Similar legislation is already in force in Alaska and Washington State, reflecting a shifting legal landscape for a drug that remains illegal under federal law.

Further down the coast, legalization campaigns are underway in California, while recreational use is already allowed in Colorado and Washington D.C. About half the country's states allow marijuana for medical use.

"We are thrilled with the end of adult marijuana prohibition, but we are far from where we need to be," said Russ Belville, from the Portland chapter of pro-marijuana group NORML, on Tuesday before the law came into effect.

Oregon residents aged 21 and older can now smoke privately, grow up to four plants and posses up to eight ounces (227 grams) at home and one ounce outside home, the Liquor Control Commission said.

Driving while high remains illegal and pot cannot be transported out of state, even to neighboring Washington, where retailing started last year, the commission said.

Public smoking also remains illegal, but there were no immediate reports of arrests at the Portland bridge.

Regulators will start accepting business license applications in January, with stores slated for next fall.

But some lawmakers remain opposed and are pushing for legislation to allow municipalities where at least 55 percent of voters opposed the November ballot to ban marijuana outlets, Republican state Senator Ted Ferrioli said on Tuesday.

"Nervousness about marijuana sort of becoming normed in our society is widespread," Ferrioli said.

In a dig at stoned snackers, Portland police have issued a graphic showing how much marijuana a person can possess by comparing the amount with a donut.